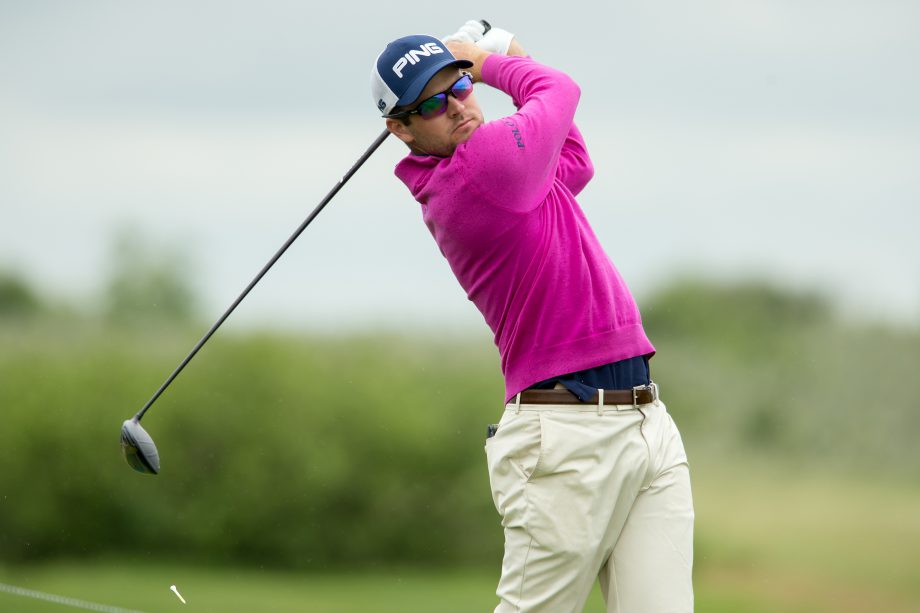 THUNDER BAY, Ont. – Edmond, Oklahoma’s Taylor Moore eagled the 18th hole on Saturday at Whitewater Golf Club to shoot a 6-under 66 and take the 54-hole lead at the Staal Foundation Open presented by Tbaytel, the sixth event of the 2016 Mackenzie Tour – PGA TOUR Canada season.

The 22-year old rolled in a 30-foot putt for eagle on the final hole to lead by one shot over Irvine, California’s Tain Lee and two over a group of three players headed to Sunday in Thunder Bay.

“Obviously that was nice to see that go in. I was just trying to lag it down the hill there and get another shot going into tomorrow, and it happened to fall in, so it was a bonus,” said Moore. “The wind started blowing on the back nine, and I just stayed steady throughout.”

Starting the day three strokes off the lead, the University of Arkansas graduate started slowly but caught fire with a 5-under 31 on the inward nine to reach 12-under, with four birdies complementing his eagle at the last.

“I got it going on those holes into the wind. I hit a few quality shots and had some putts drop,” said Moore.

Sunday’s fourth round will put plenty on the line for Moore, who needs at least a two-way tie for second to move inside the top three on the Order of Merit and earn an exemption into the RBC Canadian Open next week. Still, the rookie pro said he would try not to get caught up in the moment and continue with what has worked for him so far this week.

“I’m just going to try to take it one shot at a time and stick to my gameplan and add ‘em up at the end. At the end of the day, it’s just another golf tournament and I’ll try to hit some golf shots and make a few putts,” said Moore.

Lee, who began the day with a two-shot lead, managed a 70 to sit at 11-under, while Corey Conners, David Skinns and Cameron Peck were a shot further behind heading into Sunday.

Corey Conners is making his third start of the season and 12th of his Mackenzie Tour career. The Listowel, Ont., native sits third on the PGA TOUR Latinoamérica Order of Merit this season with four Top-10s and no missed cuts in eight events. “I have a lot of confidence from playing well down there. I have a goal to keep getting myself in position and hopefully to win an event, and it’s great to have played well all year and know that I can trust my game,” said the 24-year-old.

The member of Golf Canada’s Young Pro Squad is in his second season as a professional after a stellar amateur career that included a runner-up finish at the 2014 U.S. Amateur and a berth in the 2015 Masters Tournament. Conners played collegiate golf at Kent State, where he was twice named an NCAA All-American.

Conners’ 64 matches the course and tournament record, which was shot four times in 2014-15 and earlier on Saturday by Long Beach, California’s Brett Lederer.

Team Canada National Amateur Squad alum Austin Connelly holds a share of sixth at 9-under. Michael Gligic of Burlington, Ont., and Montréal’s Max Gilbert are part of a five-way tie for 8th.