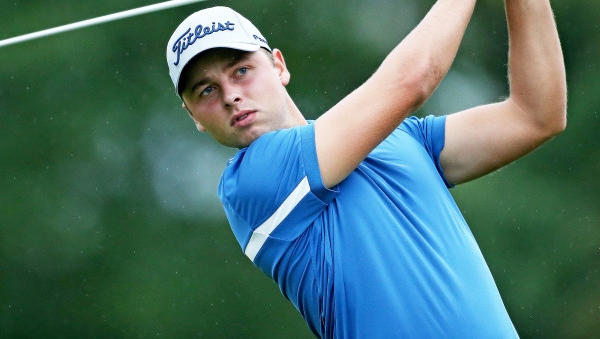 Palm Beach Gardens, Fla. – Canadian Adam Svensson started the second round of the Web.com Tour Qualifying Tournament with four consecutive birdies on the par-72 Fazio Course at PGA National Resort & Spa en route to a 7-under-par 65. The 21-year-old from Surrey, Vancouver, British Columbia’s 14-under 129 total is good for a commanding five-stroke lead over former No. 1 in the World Amateur Golf Ranking Ollie Schniederjans (68).

In a tie for third, six back, are PGA TOUR Latinoamérica alum Justin Hueber (69) and Australian Alistair Presnell (68).

Another six players are knotted at 7-under 136 and tied for fifth.

Svensson opened with a 64 on the tougher Champions Course on Thursday and successfully carried that momentum into Friday. After three consecutive birdies to the start the second round, the Mackenzie Tour – PGA TOUR Canada alum blocked his tee shot right on the par-5, 4th hole behind a group of trees. After a successful layup, Svensson flushed his third, a 9-iron from 142 yards, to 15 feet behind the hole and drained the tricky downhill putt for birdie.

“I was hitting it pretty well,” said Svensson, who found every green in regulation on the front nine. “Every shot was close to the pin and I just kept it going.”

This past season, Svensson had an opportunity to earn a PGA TOUR card through the Web.com Tour with a victory at the Regular Season finale. This past fall at the WinCo Foods Portland Open presented Kraft Heinz the former two-time All-American at Barry University had a one-shot lead over Dicky Pride heading into the weekend and carded 74-71 to fall back into a tie for 13th place.

The tournament did not end the way Svensson had hoped but he was able to take away some positives from the experience.

“I think the Oregon event helped me out a lot,” said Svensson. “I learned a lot from it and I think it was a good thing what happened to me there.”

With two rounds left before a champion is crowned, Svensson knows he must finish strong the final two days to accomplish his goal for the week.

“It’s huge to have full status and get into every event,” said Svensson, who made seven starts on Tour this past season. “It’s good to pick your own schedule, but I’m having fun and looking forward to the weekend.”

One key to Svensson’s success this week has been his play from off the tee. Through two rounds, he is T1 in Driving Accuracy (25 of 28).

The last time Svensson competed at PGA National Resort & Spa, he was a member of the Barry University golf team and led the Buccaneers to a 19-stroke win in the three-day event. Svensson used a second-round 64 to win the individual title by three strokes.