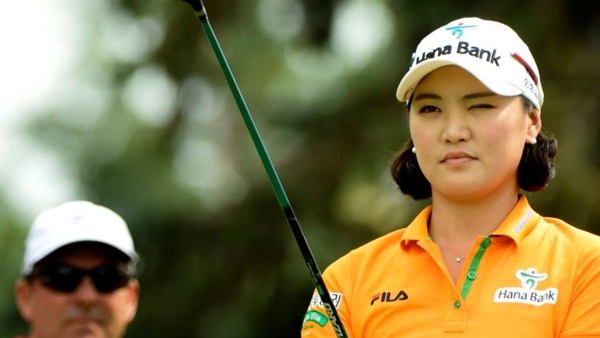 So Yeon Ryu had been racking up top-10 finishes, a total of 27, before finally pulling off her third career victory in record setting fashion at the Canadian Pacific Women’s Open. Ryu fired a tournament record 23-under-par to win by two strokes over one of her best friends, Na Yeon Choi. The World No. 5 player followed up her win with her 11th top-10 finish of 2014 – a tied for third – at the Portland Classic the following week and has been named the Kia Most Compelling Performance for the month of August.

Ryu began the week by firing a course record 63 (-9) in her first round of the Canadian Pacific Women’s Open at the London Hunt and Country Club, and ended it by setting the tournament record with a 23-under-par 72-hole total (265), five shots better than the tournament record in relation to par.  While Ryu set one record, she made the tournament even more interesting by chasing another. Ryu had the LPGA record of of 27-under par held by Annika Sorenstam at the 2001 Standard Register Ping (261 total, par-72) in her sight until late in her final round. Despite not quite catching Annika, Ryu did win her first tournament since 2012 in convincing fashion and posted yet another top-10 finish.

The 2014 Kia Most Compelling Performance Award winner will be announced at the season-ending 2014 CME Group Tour Championship following an online fan vote which begins October 1, 2014. Performances may include a single tournament, multiple tournaments, single-round accomplishments or record-breaking performances. Winners of the 2014 Kia Performance Awards receive an all-new 2015 Kia K900, the brand’s first-ever luxury sedan, and the official vehicle of the LPGA.

Mo Martin earned the award for the month of July after clinching her first LPGA win and first major victory at the RICOH Women’s British Open. Martin was a shot behind the lead with a 240-yard second shot into the 18th – a par 5 – at Royal Birkdale Golf Club. She responded with the shot of her life – a 3-wood that thwacked off the pin that ended up five feet away from the hole. One short stroke later ended in the back of the hole for her first eagle of the year and a one-stroke victory.