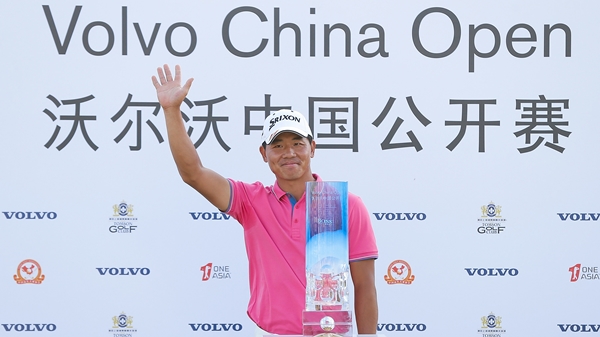 SHANGHAI – With two Chinese golfers tied for the lead going into the final round of the Volvo China Open, there was a good chance one of them would break new ground by becoming the first from the country to capture a European Tour title on home soil.

Most eyes were on Li Haotong at the start of the round, the talented 19-year-old touted as a future golf star in China. Instead, it was Wu Ashun, a player nearing 30 who had recently taken six months off to rebuild his swing and had never had a top-10 finish on the tour, who took home the trophy.

Wu proved to be the steadiest player during a final round filled with momentum swings, delighting the crowd in his hometown of Shanghai with a final-round 71 to secure a one-stroke victory over David Howell on Sunday. Wu finished at 9-under 279 overall.

“I tried my best to play every shot well,” he said. “I played very good today – not down, not up. Just simple golf today.”

It was not only the biggest title of Wu’s career, but also the biggest paycheck. He takes home nearly 500,000 euros ($543,000) – more than doubling how much he’s earned in seven years on the European Tour.

“There’s a long journey in a golf career, someone can hit a low score in their 30s, 40s, so I have to just be patient and keep practicing, keep playing the tournaments, and it will come,” Wu said through a translator.

Wu is the third Chinese player to win on the tour and the first since Liang Wen-Chong took the title at the Singapore Masters in 2007.

Howell missed a five-foot par putt on the 18th that would have forced a playoff. It was just one of four bogeys for the veteran Englishman, who also had four birdies in his round of 72.

Emiliano Grillo of Argentina had a spirited run on the final day, making four birdies in five holes on the front nine and two more on the back to pull within one shot of the lead. But his chances of winning a maiden European Tour title slipped away with a tee shot into the water on No. 17, leading to double bogey.

He shot a 69 to finish in a tie for third with defending champion Alexander Levy of France (73) and Prom Meesawat of Thailand (71).

Wu started the day in a four-way tie for the lead with Howell, Levy and Li, but he had played the least recently. He was coming off a six-month break to work on his swing with his coach in California and didn’t make the cut at a Japan Tour event last week.

Li, on the other hand, nearly won his first European Tour title last week at the Shenzhen International, losing in a playoff to Thailand’s Kiradech Aphibarnrat.

Li, however, didn’t look sharp from the first hole Sunday. With hundreds of excited fans lining the green, phones poised to snap photos, he missed a routine 3-foot par putt that caught the lip of the cup and curled away, drawing gasps from the gallery.

It was just the start of an up-and-down day for the rising star. He made a 50-foot birdie putt on No. 8 and then a tremendous approach and nervy putt for eagle on the par-5 No. 13, but also missed a number of relatively easy putts from close in, the frustration apparent on his face.

He carded five bogeys – more than his first three rounds combined – and finished tied for sixth at 6-under 282.

“It’s a great experience for me, especially considering I still finished sixth, which is much better than last year, so I learned a lot,” he said.

Howell had vastly more experience than the Chinese players, with 523 starts on the European Tour compared to just 26 for Wu and 13 for Li. Ten years ago in Shanghai, he fought then-No. 1 Tiger Woods in the final round of the HSBC Champions – and won the title.

But Howell missed when it mattered most, trying to save par after his approach on the 18th left him with a long putt. When his shot skirted by the left side of the hole, thousands of Chinese fans around the Tomson Golf Club erupted in cheers.

“Obviously a crying shame for me not to come home with the trophy, but there’s I don’t know how many billion people who are rather pleased I made six on the last,” Howell said.