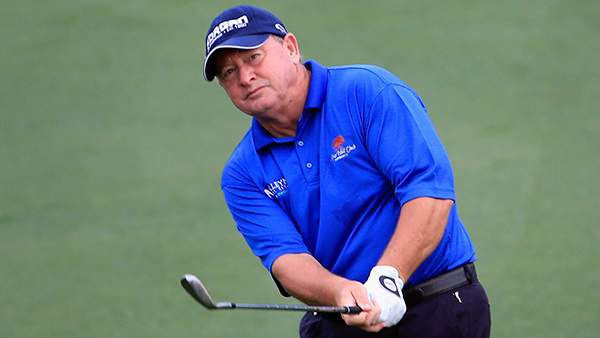 DULUTH, Ga. – Ian Woosnam was tied for the lead at 4 under with five holes left Friday when first-round play in the Champions Tour’s Greater Gwinnett Championship was suspended because of rain.

The round was scheduled to be completed Saturday morning at TPC Sugarloaf, followed by the second round. There is more rain in the forecast Saturday and Sunday.

Defending champion Miguel Angel Jimenez was even par through 11 holes.

Jimenez had a streak of 40 consecutive holes without a bogey at TPC Sugarloaf – including his final 32 holes in last year’s win – end on his ninth hole. Jimenez, trying to reach the green with his second shot on the par-5 18th, instead found water, leading to his bogey.

Bernhard Langer, second last year after winning the inaugural tournament in 2013, was 1 under through 12.

Only one group completed the first round, with Tom Byrum the clubhouse leader at 3-under 69.

Water was standing on the greens when play was halted. When play was stopped, the plan was to clear the greens and then continue the round. Continued rain changed the plan.

“The fairways were just unplayable and water was standing on the greens, so it’s just so wet,” Hallberg said, adding he wasn’t prepared for the conditions.

“I’ve got this old golf bag that I’ve been using and the water just soaks right into it, so it’s not a good rain bag,” Hallberg said. “And I’m not dressed for it. I don’t have rain pants, I left everything at home.”

Hallberg said he assumed “Going to Atlanta, it’s going to be nice. That was a mistake.”

Those with a long history on the course, the former home of The PGA Tour’s BellSouth Classic, know rain is a common factor.

“It’s incredible, isn’t it?” Woosnam asked. “I’ve been here so many times and it’s rained nearly every time. One year it snowed. … Quite incredible, unfortunate this place has been with the weather.”

“I’m just trying to sort of like build myself into it,” Woosnam said of his early status as a contender this week. “We’re still working on my swing a little bit. One minute I get it and next I lose it a little bit.”

Woosnam and Hallberg are playing on sponsor exemptions.

“This is really my first tournament I feel 100 percent,” Hallberg said. “I feel good.”

Woosnam was bracing for an unusually early start of play on Saturday – and an early bedtime on Friday night.

“I’ll tell you what, I’ve never been to bed so early in America,” Woosnam said.