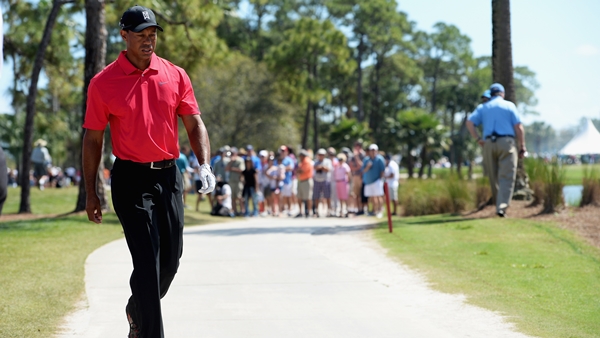 PALM BEACH GARDENS, Fla. – The last time Tiger Woods quit in the middle of a round because of an injury, he won his next tournament. And then he followed that with his highest score ever in the Masters, the ultimate measure of Woods these days.

Making predictions about the world’s No. 1 player is like gauging the wind at Amen Corner. You’re bound to get it wrong for three reasons:

NBC Sports analyst Johnny Miller got it right at the start of the year when he was talking about which players might have big years. He stopped short of naming a list of players because of reason No. 2. And then he added this nugget:

“It was pretty easy to predict Tiger there for a while,” Miller said.

These days, about all anyone can safely predict about Woods is that he’ll wear a red shirt on Sunday.

Assuming he makes it to Sunday.

In two starts on the PGA Tour this year, Woods is measured by letters instead of numbers. He had an “MDF” at Torrey Pines, which is the tour’s acronym for players who miss the 54-hole cut. And he had a “WD” at the Honda Classic when he withdrew after 13 holes on the final round on Sunday.

The question now is how long he will be MIA.

The leaders were finishing up the front nine when attention shifted from the golf course to the PGA National parking lot that suddenly was swarming with police. Some two dozen reporters and photographers were waiting for Woods. He finally showed up in a white passenger van, changed out of his shoes and then was driven off in a black Mercedes-Benz to his home just north on Jupiter Island.

Just like last time _ just like always _ only Woods knows the amount of the pain and the degree of the injury.

He said through spokesman Glenn Greenspan that he felt “lower back problems with spasms” as he was warming up Sunday morning. On the third hole, he hit a tee shot so far to the right that it wound up in a water hazard to the left of the sixth green. And when he played the sixth hole, he pulled his tee shot into the water. Six holes into the final round, Woods already was 5 over for the day and 12 shots out of the lead.

He said he would get treatment every day to “calm it down.” As for playing next week at Doral, he said he would wait until Thursday to see how it feels.

The Blue Monster is more blue than ever after a redesign ordered by new owner Donald Trump. Woods is the defending champion at the Cadillac Championship, though the course where he has won four times is not what it used to be.

But this isn’t about whether he can play Doral or Bay Hill two weeks later, or how he will fare at Augusta National next month. The injuries are starting to pile up since he returned from the chaos in his personal life.

Woods had two WDs on his professional record through 2009. One was at Pebble Beach in 1998 when he chose not to return after a seven-month rain delay to finish. The other was in 2006 at Riviera when he made the cut and then withdrew the next morning with the flu.

Now he has four in the last five years.

Woods’ didn’t finish the final round at Doral in 2012 because of his Achilles tendon (and then he won at Bay Hill two weeks later). And now he starts out 2014 by having to pull out of another tournament.

That’s five straight years when a season has been interrupted by injury. He didn’t withdraw last year, though he missed his own AT&T National and a scheduled start at The Greenbrier Classic because of a left elbow strain.

Sunday at the Honda Classic was not his first issue with lower back pain. He said the feelings were the same as they were at The Barclays last summer, when he dropped to his knees after one shot in the final round. He finished out that round in a tie for second, one shot behind Adam Scott.

He didn’t finish among the top 10 the rest of the FedEx Cup playoffs. Then again, he went 4-1 and earned the most points at the Presidents Cup. He tied for third in Turkey. He lost in a playoff to Zach Johnson at his 18-man World Challenge. How much did the back pain linger? Only Woods knows.

Woods turned 38 last December, and he looks a tired 38.

He spoke earlier in the year at Dubai about spending much of the off-season “to get my body organized,” conceding he didn’t practice as much as he would have liked. The Masters is just over a month away, no time for him to panic. If anything, this might help take some pressure off his bid to end five years without a major.

Woods said at the start of last week that once the PGA Tour gets to Florida, everyone is thinking about their way to Augusta.

He wasn’t planning on another detour.