Woods: ‘Still too soon’ to know if he’ll play at Masters 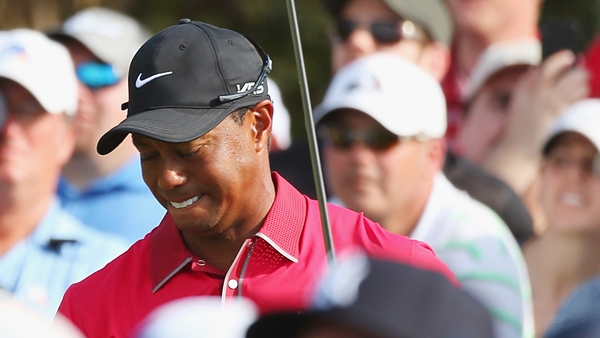 WASHINGTON – Tiger Woods is not sure whether his ailing back will allow him to play in the Masters, which is two weeks away.

“For Augusta, it’s actually still a little too soon, to be honest with you,” Woods said Monday at a news conference to announce that Quicken Loans is the new title sponsor of his golf tournament. “That’s kind of the frustrating thing about this.”

The Masters is the only major tournament the 38-year-old Woods has never missed. Four of his 14 major championships came at Augusta National, including his first in 1997. He last won the green jacket in 2005.

Woods is off to the worst start of his 18 years on tour, and he’s been troubled lately by back problems.

He stopped playing in the final round at the Honda Classic on March 2 because of what he called back spasms and pain in his lower back. He tried to defend his title the following week at Doral, only for his back to flare up again in the final round, when he shot a 78, the highest Sunday score of his PGA Tour career and his first closing round without a birdie.

Then last week, Woods withdrew from the Arnold Palmer Invitational because of persistent back pain.

“I’ve had a couple weeks off and getting treatment and just working on trying to get ready for Augusta,” Woods said Monday. “As of right now, it’s still too soon, which is, as I said, pretty frustrating.”

This has been the longest sustained problem Woods has had with his lower back.

At Monday’s news conference, Woods discussed a deal through 2017 for his tournament to be called the Quicken Loans National. It will be played June 26-29 at Congressional this year. AT&T was in the final year of its contract as sponsor.

The AT&T National began in 2007 with a military theme built around the Fourth of July in the nation’s capital. It has been held at Congressional for all but two years, in 2010 and 2011, as the course prepared to host the U.S. Open. In those years, it was played at Aronimink outside Philadelphia.

Congressional is under contract through 2014, and Woods said there will be a vote next week to determine whether the club would host every other year in 2016, 2018 and 2020.