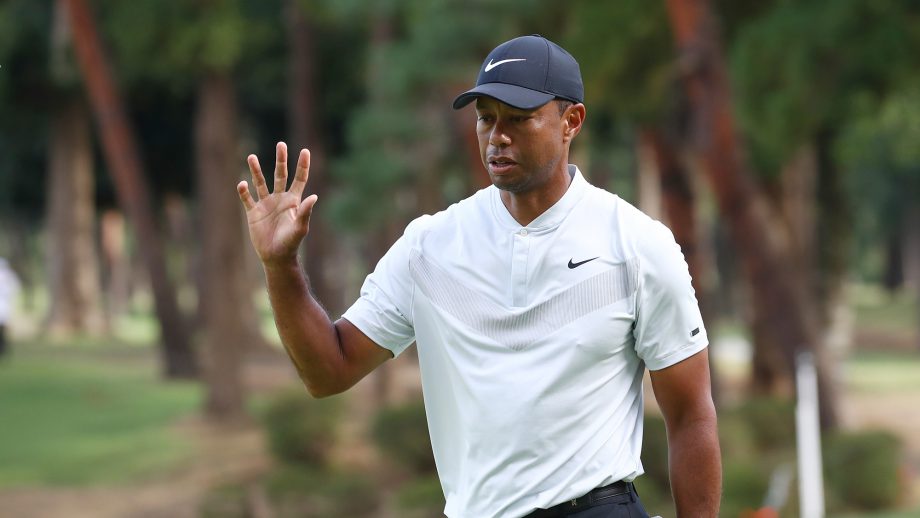 INZAI CITY, Japan – Tiger Woods produced a round that would have had the spectators roaring.

Teeing off in front of empty stands, Woods shot a second straight 6-under 64 on Saturday to take a two-stroke lead over Gary Woodland after the second round of the rain-hit Zozo Championship.

“I’m surprised that I was able to score as well as I have, usually that takes a little bit of time,” Woods said. “But this golf course is a little bit on the softer side. I’ve been able to strike my irons pretty well this week so far and that’s been nice.”

Organizers of the PGA Tour’s first tournament in Japan took the unusual step of closing the Accordia Golf Narashino Country Club course to spectators for Saturday’s second round over safety concerns.

“Today was just one of those days where we did this at Congressional one year when the derecho (storm) came through there and it was just like a ghost town,” Woods said. “This was a little bit different. When you make a putt and you kind of put your hand up, you’re like, hmm, don’t really need to put your hand up because there’s no one clapping.”

It was in stark contrast to Thursday’s opening round when huge crowds followed the American.

Torrential rain washed out play on Friday causing the second round to be moved to Saturday after the course took on more than eight inches (20 centimetres) of rain. Flooding and mudslides in towns in the surrounding area left at least nine people dead, expanding damage in areas still recovering from recent typhoons.

With the course in remarkably good condition, Woods picked up where he left off after a 64 in Thursday’s opening round with a birdie on the first hole. It was one of seven birdies on the day that gave him a 36-hole total of 12-under 128, two shots ahead of Woodland (66).

Woods took the lead on the par-4 17th when his approach shot landed a foot from the hole and the Masters champion made the easy birdie putt before another birdie on the par-5 18th with darkness setting in. His only bogey came on the par-4 second hole.

Play starts 6:30 a.m. local time Sunday when organizers hope to get in as many holes as possible. The event is set to conclude on Monday in order to complete 72 holes.

Woodland, who shared the lead with Woods after the first round, had five birdies including three straight from the par-3 16th.

“It was a grind all day,” Woodland said. “I didn’t have my best stuff today. Hit some putts early that didn’t go in and fortunately I made three big putts there on 16, 17 and 18, which was awesome.”

Local favourite Hideki Matsuyama and Keegan Bradley were tied for third at 8 under. Bradley shot a 63 that included eight birdies against a lone bogey while Matsuyama had a 67.

Rory McIlroy, the highest-ranked player in the field, shot a 65 to move into a tie for 21st.

Woods is making his first start in his 23rd season on the PGA Tour, needing one victory to reach 82 wins and tie the career record held by Sam Snead.