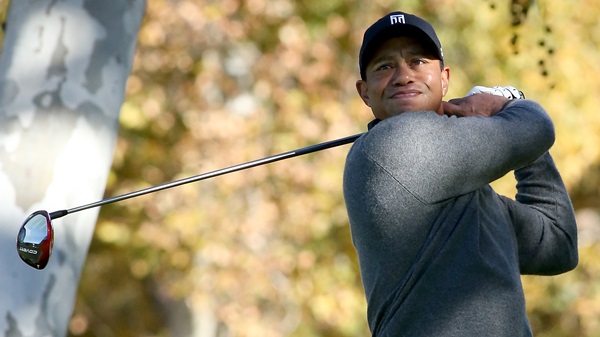 THOUSAND OAKS, Calif. – Tiger Woods believes it’s harder than ever to win on the PGA Tour because of the increasing depth of talent of the players.

And most of them are at his tournament this week.

The World Challenge gets underway Thursday, held at Sherwood Country Club for the last time, and the field is so strong that the entire 18-man field is in the top 30 in the world ranking. That’s what makes it difficult to win trophies.

And what’s why Woods laughs at using the phrase “pretty good” to describe a year in which he won five times on the PGA Tour.

“I think it’s deeper now than it ever has been,” Woods said. “There is more young talent. There are more guys winning golf tournaments for the first time. If you look at the major championships, how long did we go from basically Phil winning and Phil winning?”

He was referring to the 13 majors played between Phil Mickelson winning the 2010 Masters and the British Open this year. Eleven of those champions had never won a major, the exceptions being Ernie Els and Rory McIlroy.

Of those 11 first-time major champions, only Darren Clarke has fallen lower than No. 40 in the world.

He pointed to advancements in equipment, particularly from wood drivers and wound golf balls. Woods says the younger players who hit the ball high “are shocked to see the ball get moved by the wind.”

“For a lot of us who grew up playing balata balls, you wanted to get that thing down. You didn’t want it up in that wind because it got pushed around like you wouldn’t believe,” he said. “It’s a totally different game. Guys have evolved, and I think they’ve become much more aggressive now than they ever used to be because of equipment.”

Separating the best players is getting more difficult.

Graeme McDowell set a target to get back into the top five in the world at the start of the season. He wanted a certain amount of world ranking points that he figured would do the trick, and he about reached that level. Little did he know that so many other players also raised the level of their game.

Woods dominated the PGA Tour with five wins against five tough fields, which also gave him another Vardon Trophy and money title. Henrik Stenson became the first player to win the FedEx Cup on the PGA Tour and the Race to Dubai on the European Tour.

Adam Scott and Phil Mickelson had multiple wins around the world that included historic majors – Scott was the first Australian in a green jacket at Augusta National, Mickelson won a British Open that not even he thought he could ever win.

Jordan Spieth finished No. 7 in the FedEx Cup even though he didn’t have status on the PGA Tour at the start of the year. Hideki Matsuyama became the first rookie to win the Japan Golf Tour money title, and he didn’t even turn pro until April.

And this list of characters doesn’t include McIlroy, who began the year at No. 1 and is just now starting to emerge from a slump.

“You’ve got to play really well to win,” McIlroy said. “I think that’s why you see so many first-time winners, because the field is so deep, and it is tough to win out here. But I think golf is in great shape.”

Comparing eras is never easy, though Woods detected a big difference from a generation ago.

At the end of the 1990s and early in the 2000s, golf was strong at the top – Woods, David Duval, Mickelson, Els, Vijay Singh. But there was a reasonable gap between the biggest stars and the next level. From 1999 through 2002, there was a massive gap between Woods and the other stars.

Woods said a player now has to be consistent to be among the best.

The World Challenge is the end of the year for the majority of the field – a few players are headed to Thailand next week – and it should set the table for a fascinating season in 2014. Stenson and Scott will try to sustain their excellence, along with a newcomer such as Spieth.

Woods said that he still looks at the way players hit the ball to determine who has game, though the direction is different. When he first joined the tour in 1996, it was players who could work the ball both ways. Now he looks at the players who can manoeuvr the trajectory.

“You don’t see shot-makers like you used to. The ball doesn’t curve like it used to,” Woods said. “It just doesn’t move as much. But you look at the guys who are pretty good players at the top. They cannot really shape the golf ball necessarily, but they can move their trajectory up and down. I think that’s where the shape has changed. They don’t shape it as much from right to left, but more in altitude.”

After this year, the tournament is going through a change in latitude.

This is the 14th year the World Challenge is held at Sherwood, a Jack Nicklaus design with emerald fairways set against the brown foothills of the Santa Monica mountains. The Tiger Woods Foundation announced last month that it is moving to Isleworth outside Orlando.