Woods, his game far from fit, struggles at PGA 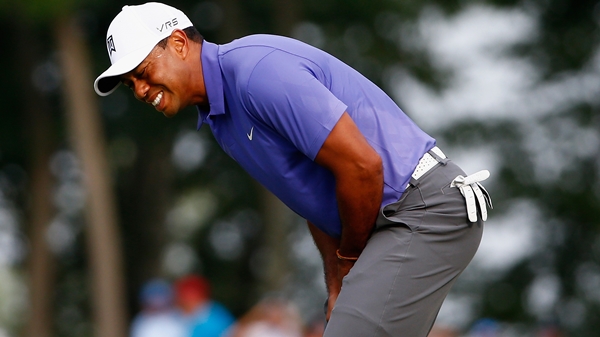 LOUISVILLE, Ky. – Maybe Tiger Woods should have stayed at home.

Looking much like a guy playing just his 11th competitive round since back surgery, Woods was spraying shots all over Valhalla and playing himself out of contention at the PGA Championship before heavy favorite Rory McIlroy even teed off Thursday.

“Oh, for … sake, Tiger!” he yelled at himself on No. 2, muttering an obscenity after yanking his tee shot near a creek, leading to a one-stroke penalty.

Woods underwent surgery March 31 and missed the first two majors of the year. He returned in time for the British Open, but struggled to his worst 72-hole finish in a major. Then he withdrew from the World Golf Championship at Firestone just four days ago after taking an awkward swing, hurting his back again.

He finally arrived at the PGA on Wednesday – with live television showing Woods parking his car and tying his golf shoes – and proclaimed himself fit.

It sure didn’t look that way.

Starting on the back side, Woods bogeyed both of the par-3s after missing the green, though he did salvage an unlikely birdie at the 16th by holing out a wedge from more than 100 feet away.

But he missed a chance to make up more ground at the easy 18th, knocking his drive into a fairway bunker at the par-5 hole, and things really took a turn for the worse after Woods made the turn.

He just couldn’t find any accuracy off the tee.

Woods drove one into a native area at the first, leading to a bogey. Then came another poor drive at the second, forcing him to take a drop and settle for his fourth bogey in 11 holes.

He was 3 over for the round and eight shots behind early leader Kevin Chappell. Edoardo Molinari of Italy was 4 under, while Ryder Cup hopeful Brendon Todd and perennial major contender Rickie Fowler led a group of players at 3 under.

This was a big week for Todd, who was 12th in the Ryder Cup standings and looking to push his way into an automatic spot at the final qualifying event. The top nine after Sunday will make the team, before captain Tom Watson fills out his roster with three wild-card picks.

Fowler has finished in the top five at the first three majors this year, but is still seeking his first championship. He was runner-up at both the U.S. Open and British Open.

Phil Mickelson, playing in the same group as Woods for one of the rare times at a major, was 1 over. Lefty was just out of the mix for a Ryder Cup spot, though it’s expected he would be a captain’s choice if he doesn’t qualify. Mickelson hasn’t won in nearly 13 months, since his victory at the 2013 British Open.

This is his longest drought since 2003.

Everyone seemed to be chasing McIlroy, who was the overwhelming favorite coming off wins at the British Open and at Firestone. The three-time major champion had an afternoon tee time.

One player who won’t be winning: Matt Kuchar, who withdrew just before teeing off because of back spasms.

Canada’s David Hearn and Graham DeLaet tee off at 1pm and 1:15pm (EDT).