Woods brings back big crowds, big cheers with a 72 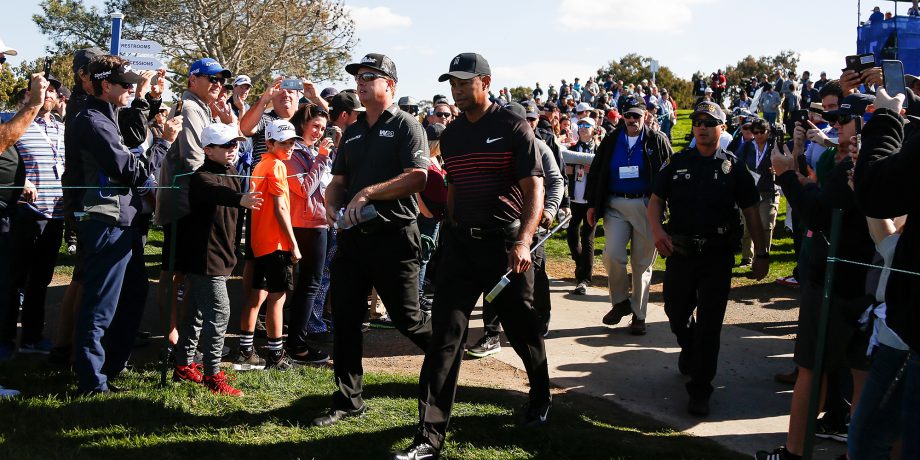 SAN DIEGO – Tiger Woods has been away from the PGA Tour too long to know for certain when a shot is as good as it looks.

This was a 6-iron on the par-3 16th hole on the South Course at Torrey Pines, from 188 yards to a slightly elevated green with a pin tucked behind a deep bunker. The sun was setting behind the Pacific late Thursday afternoon, and the glare made it tough to follow the flight of the ball.

“We can’t see anything land from back there, so we’re just listening for some noise,” Woods said. “And people started cheering.”

The ball rolled to the hole and broke a few inches in front of the cup for a tap-in birdie .

Woods brought big crowds back to golf in his latest return to the PGA Tour, and he even produced a few big roars.

There just weren’t enough cheers for his liking.

Playing for the first time since recovering from a fourth back surgery that cost him another year on the PGA Tour, Woods was mostly steady, sometimes spectacular and ended his day with an even-par 72 that left him seven shots behind Tony Finau.

The next trick is to stay at Torrey Pines beyond Friday. With virtually no wind making this a day for reasonable scoring, Woods was tied for 84th and will start the second round on the North Course just outside the cut line.

Finau birdied his opening two holes on the North and finished with a 35-foot birdie putt for a 65.

Woods had a few big moments that looked familiar to fans who stood as many as four-deep around the greens.

His three birdie putts were from a combined 30 inches. The longest of his birdie putt was from just inside 2 feet on No. 10 that got him back to even par for the round. He was one rotation away from making a long eagle putt on the par-5 sixth.

He was never under par the entire round, and his near ace on the 16th brought him back to even par.

But he needed those three birdies to offset his mistakes, and the sobering part of his return is that Woods didn’t make a putt longer than 4 feet. That was on the second hole, when his approach from the bunker landed 6 feet behind the hole and went over the back into light rough.

He also gave away a shot on the par-5 13th, when he laid up from the rough and hit a wedge that drifted right and went into the bunker. He blasted that out to 3 feet, which was the hard part. And then he missed the short par putt .

Woods made his other two bogeys from greenside bunkers, both times missing 12-foot putts.

He played the par 5s in even par, and didn’t give himself any other birdie chances inside 15 feet.

“It’s hard to make a lot of birdies when you’re not giving yourself any looks, and I didn’t do that today,” Woods said. “Tomorrow, hopefully, I’ll drive a little better, get my irons obviously a lot closer and we get the better of the two greens tomorrow. So we’ll see what happens.”

But there was no mistaking his presence.

Fans lined both sides of the opening fairway in anticipation of seeing Woods, who was playing the PGA Tour for only the second time since August 2015. That was right before he had a second and third surgery on his back, which kept him away for some 15 months. He returned at Torrey Pines last year and opened with a 76 on his way to missing the cut. A week later, he withdrew after a 77 in Dubai with back spasms and was gone again.

Regardless of the score, Woods looked as though he’s back for the long haul. The fusion surgery eliminated the pain. And while he wasn’t sharp, Woods hit the ball plenty far and saw at least a little bit of golf that made him such a dominant figure.

The South Course, which hosted the 2008 U.S. Open that Woods won, typically is far stronger than the North at Torrey Pines. That’s no longer the case with the North getting a makeover two years ago, with bent greens that are firm this week and narrower fairways.

Finau birdied his opening two holes to set the tone for his round, and he wound up with nine birdies, the last one from 35 feet to take the lead.

“It played a lot tougher than it did in the past,” Finau said. “I think it’s just a credit to my start. From there I was just able to let the golf course come to me. The par 5s are very reachable for me hitting some irons in there. Again, I think it was just my start. I got off to a good start and was able to ride that momentum all the way through the round.”

He had a one-shot lead over Ryan Palmer and Ted Potter Jr., who each had a 66 on the South.

Ben Silverman of Thornhill, Ont., was the low Canadian after a 3-under 69 and Adam Hadwin (71) of Abbotsford, B.C., was 1 under. Corey Conners of Listowel, Ont., Nick Taylor of Abbotsford, and Mac Hughes of Dundas, Ont., all shot even rounds of 72 while David Hearn (81) of Brantford, Ont., was 9 over.

Defending champion Jon Rahm, who can reach No. 1 in the world by winning, opened with a 68 on the South. He hit into the water with his second shot on the par-5 18th, but he saved par with a 15-foot putt.

“Just unfortunate it happened, but I made a good putt, had a couple really good putts down the stretch and had a good finish,” Rahm said. “Good momentum going to tomorrow.”