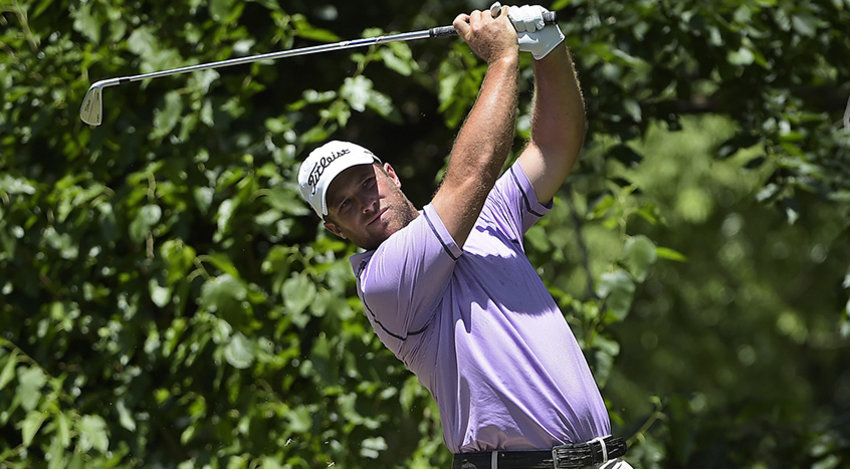 WICHITA, Kansas – Andy Winings fired a 4-under 66 Saturday and grabbed the 54-hole lead at the Web.com Tour’s Air Capital Classic presented by AETNA. Winings stands at 13-under 197 after three trips around Crestview Country Club, two better than Nicholas Lindheim (65) and three in front of Nebraska’s Scott Gutschewski (67) and Floridian Brett Stegmaier (67).

Second-round co-leader Dawie van der Walt of South Africa fired an even-par 70 and is four back after 54 holes.

Winings was forced to rely on his putter in the third round after hitting only 10 of 18 greens in regulation.

“The X-factor this week has been my putter,” he said. “I made a lot of good putts and just grinded it out.”

Winings canned three clutch putts late in the day to keep his name atop the leaderboard. He needed a 10-footer to save par on No. 15 after hitting his tee shot into the rough and laying up on the par-4. He had similar problems on No. 16 and bailed himself out with a 12-footer for par.

At the raucous, par-3 17th hole, he delighted the skybox crowd with a 6-iron to five feet. The subsequent birdie putt was worth free cheeseburgers for the assembled masses.

“Those were all key putts for me,” said the 28-year old leader. “They kept the momentum going for me.”

Winings owns a 54-hole lead for the first time in his career and is being chased by Lindheim, a self-taught, 30-year-old who admits to being a late bloomer.

“I didn’t know I was moving up the leaderboard until I looked on 18,” he said. “I started rough and stayed patient like everybody says. I made a couple of putts, took advantage of the good shots I hit, and there you go.”