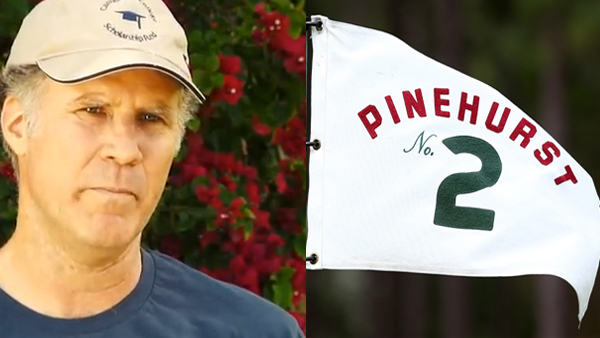 Photos from Golf.com and Getty Images

The highly anticipated 2014 US Open will officially get underway this Thursday, drawing in golf’s biggest names as they vie for the chance to hoist the US Open trophy in Pinehurst, North Carolina.

Of those names, here are the top 10 that should be on your radar as put together by the PGA TOUR.

US Open Thoughts with Will Ferrell

Will Ferrell isn’t a name you immediately associate with the phrase “US Open at Pinehurst No. 2” but the man sure does have some imaginative ideas to improve the game of golf, including big game cats and booby traps.

Maybe we’ll see some of his suggestions implemented for 2015? But don’t hold your breath.

A (more accurate) US Open Preview:

In the meantime, Pinehurst No. 2 might not look quite how you remembered it. In anticipation of hosting both the Mens and Women’s Open this June, 40 acres of turf were removed in favour of more sandy areas and wiry grass. These renovations have restored the course to its more rustic and natural 1930’s appearance.

Here’s what you can actually expect to see at the 114th playing of the US national championship:

While Will Ferrell would have all US Open competitors in mesh tank tops, it is far more likely these athletes will be opting for a  more sleeved look while on the course.

Here is a look at what Graham DeLaet will be wearing when he competes this week:

EA Sports has released a preview of their first golf video game not featuring Tiger Woods in over 15 years. The game promises the chance to play on golf’s most prestigious courses (Pinehurst No 2. is among them) and even some fantasy courses, including teeing off in the midst of an Ocean battle, which might satisfy the ‘Will Ferrell’s’ of the golf world for now.

Check it out here: