Wiesberger leads heading into final round of Malaysian Open 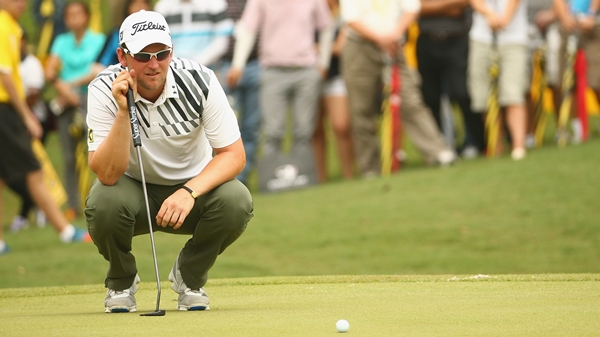 KUALA LUMPUR, Malaysia – Bernd Wiesberger is well positioned to cap a superb month of golf with victory in the Malaysian Open after shooting a 9-under 63 on Saturday, taking a two-shot lead going into the final round.

He moved to 17-under 199 overall at Kuala Lumpur Golf and Country Club, two strokes ahead of Spain’s Alejandro Canizares, who finished his roller-coaster round eagle-birdie-bogey to card a 68.

Defending champion Lee Westwood struggled for much of the round before picking up birdies on his final two holes to sit three off the pace following a 69.

The Englishman is in a tie for third on 14-under alongside compatriot Paul Waring, who carded a 65 featuring two eagles, six birdies and three bogeys.

The round of the day belonged to Indian Anirban Lahiri, who produced a bogey-free 62 that put him in outright fifth on 12-under.

They are all chasing the white-hot Wiesberger, who has started 2015 with a tied sixth in Abu Dhabi, third in Qatar and tied fourth at the Dubai Desert Classic to move into the world’s top 50 for the first time.

“It’s my European Tour record, I’ve never shot 63, so it was good to do it on Saturday when in contention,” Wiesberger said. “I started really nicely and finished really nicely, so there were a lot of good things.

“I just have to hit good shots and see what happens. If I keep playing like this, I have a good chance to take this home.”

The world No.48 opened with five consecutive birdies and carded 10 in total, with his lone bogey coming on the par 3 eighth hole.

The last of Wiesberger’s four European Tour titles came in his native Austria back in 2012, but he has now played 17 straight rounds in par or better, dating back to last November.

Lahiri started the day nine back in a tie for 29th before equaling the best round ever produced at the KLGCC. Frenchman Raphael Jacquelin also shot 62 in 2009.

“It was awesome,” Lahiri said. “I started off in a positive mood and I kept the momentum going.

“I didn’t really care much what was happening on the leaderboard. It was nice to go out there and play with freedom and that’s what I’ll try to do tomorrow.”