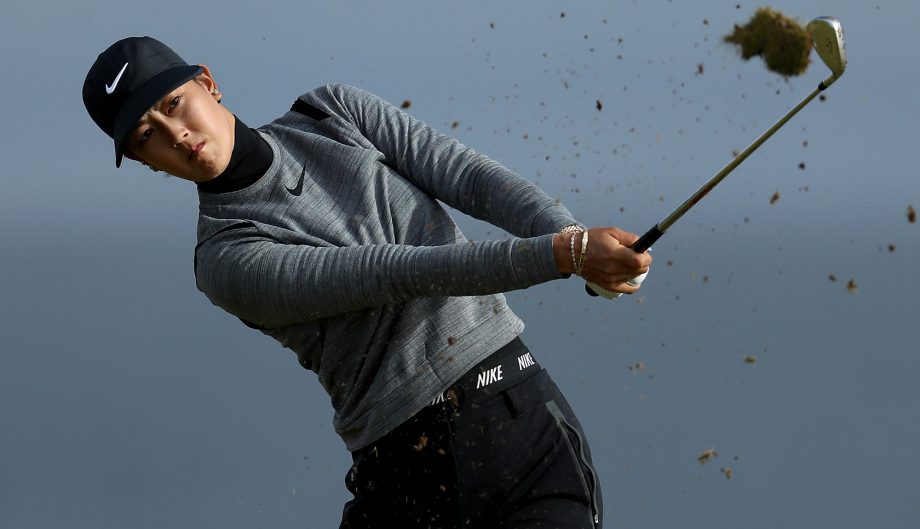 ST. ANDREWS, Scotland – Finishing fast after a slow start, Michelle Wie birdied her last three holes Thursday for an 8-under 64 for a one-shot lead in the Women’s British Open.

Wie bogeyed the par-5 second hole at Kingsbarns Links, and that was the last of her mistakes. The 27-year-old American shot 30 on the back nine and wound up one shot ahead of I.K. Kim of South Korea.

Lindy Duncan was another shot behind at 66, with Lexi Thompson among those at 67.

Wie, showing no sign of the neck spasms that forced her to withdraw from last month’s U.S Women’s Open, posted nine birdies during a morning round played in almost perfect weather on the eastern coast of Scotland.

Only later did torrential downpours and the threat of lightning twice disrupt play for a total of 74 minutes.

Laura Davies was one who suffered from the interruptions. Six-under par through 14 holes, the 53-year old from England finished in a mildly disappointing 68, the same score posted by Charley Hull, Britain’s top player.

There were no such problems for Wie. Such was the overall serenity of her progress, the Hawaii native even had time to take in the stunning vistas across what she referred to as the “ocean,” which is actually the Tay Estuary.

Following the early dropped shot – a badly skulled lob wedge finished far over the second green – she reeled off three birdies before the turn. Over the back nine, it only got better with six birdies in the final eight holes.

“It’s so gorgeous here,” said Wie, who has not won since claiming the U.S Women’s Open at Pinehurst in 2014. “When the weather is nice, it almost felt like I was playing back home in Hawaii with the views and everything. I feel like I got extremely lucky with the conditions out there.”

Still, no one else in the 144-player field took as much advantage. The lack of wind and softness underfoot left the 6,697-yard course all but defenceless and allowed Wie to use her high-flying lofted woods to great effect. Six of her nine birdies resulted from approach shots with metals, the 9- and 11-woods that have been in her bag since June proving most effective.

“Callaway has done a great job of accommodating me,” said Wie. “They had to look back into their archives to find me an 11-wood. I’ve never played such high-lofted woods before. The 11-wood goes 180-yards, the same distance as my 5-iron but is a lot easier to hit than a blade. The 9-wood replaces my 4-hybrid and goes 190 to 195 yards.”

As for Thompson, the big-hitting Floridian relied less on the yardage book and more on her caddie. Kevin McAlpine, a former Scottish Amateur champion, worked at Kingsbarns for four summers prior to taking the Thompson bag.

Brooke Henderson of Smiths Falls, Ont., opened at 2-under 70.

So Yeon Ryu, the No. 1 player in the world, opened with a 71, along with Hamilton’s Alena Sharp.