With Wi-Fi and LED, British Open has modern feel 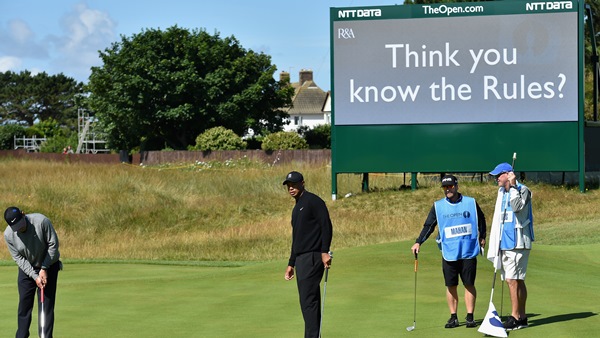 It’s one thing for golf to evolve from gutta percha to polyurethane, from niblicks to hybrids, from hickory to graphite. Now the British Open is all about LED screens, apps and routers. Yes, there are wireless routers affixed to every grandstand at Royal Liverpool.

Leave it to the Royal & Ancient to be on the cutting edge of digital technology among major championships.

The British Open is believed to be the first major golf event to offer wireless in every grandstand, allowing spectators with mobile phone and tablets to watch the BBC coverage, track their favorite player through GPS, and get details through up-to-the minute scoring updates.

“The experience for our spectators will, I believe, be the best they have ever received,” said Peter Unsworth, chairman of the R&A’s championship committee. “Using their own smartphones and tablets, and our groundbreaking Wi-Fi network which is available in every grandstand, they will be able to enjoy live BBC television and radio coverage, live scoring and get news and updates without leaving their seat.

“The information available to our spectators has never been so readily available.”

And to think this major only three years ago banned cellphones from the golf course. Now they’re telling spectators they’re missing out if they don’t have them.

The R&A last year installed wireless signals as an experiment, with the source of streaming capabilities coming from London. It was so pleased with the result that it now has installed its own fiber optic network at most of the links courses where it holds The Open, starting with Hoylake.

Malcolm Booth, the R&A’s communications director, said the signal is strong enough for as many as 20,000 fans to stream video at the same time.

A popular theme at the R&A over the last two decades has been finding a balance between tradition and technology. R&A chief executive Peter Dawson always thought that would involve only equipment. Now he is trying to grasp a world of live streaming and second-screen channels.

“What it will be 10 years from now I can scarcely imagine,” Dawson said.

Traditions die hard at the oldest golf championship in the world, which dates to 1860. Tom Watson, a five-time champion who played his first British Open before Tiger Woods was even born, couldn’t help notice some of the changes during a practice round Monday.

“What happened to the yellow scoreboards?” he said.

For starters, the scoreboards changed from yellow to green years ago, but point taken. For the longest time, there was a manual scoreboard behind each green that showed the cumulative score of the players on that hole, and the scores of the group next to play.

Those are gone, replaced by LED screens that now give scores, news updates on the championship, and even a rules quiz during the practice rounds.

Dawson said former championship committee chairman Jim McArthur was a strong advocate for getting up to speed with digital technology, and it then was turned over to Booth and the communications department.

Booth said it wasn’t a hard sell to the Royal & Ancient, though “there was a lot of explaining to do.”

“There was a need to explain how this could impact on the experience for spectators,” he said. “Having a radio at the Open is not new. People have been doing it for decades. Having a television picture on a hand-held device has been pretty common at big events like the PGA Championship and Ryder Cup. They were aware of these devices. What they weren’t sure about was how easy it was to take that technology and have it on each person’s phones.”

Oddly enough, it was at Royal Liverpool in 2006 when spectators took so many pictures with their phones that mobile devices were banned the following year. The R&A finally relented on that strict policy in 2012 at Royal Lytham & St. Annes.

Now it has Wi-Fi networks, routers, live streaming, geofencing. Is there anything still ancient about the Royal & Ancient?

“Me,” Dawson said with a smile.

He retires next year after 16 years as chief executive, the last few years filled with technology changes he never imagined. He still likes the balance between old and new. The Open still is played on the same turf where Old Tom Morris and Willie Park Sr. vied for championships. The claret jug has been passed around for 86 years.

“But I think in the modern era,” Dawson said, “the way that people now embrace this technology is something that golf also has to embrace.”