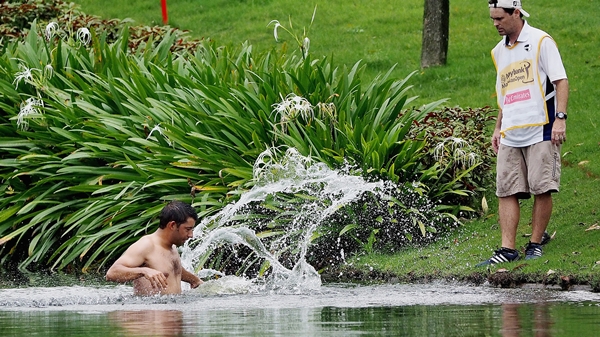 KUALA LUMPUR, Malaysia – Lee Westwood jumped out to a four-shot lead and Pablo Larrazabal jumped into a water hazard to escape hornets during the Malaysian Open second round on Friday.

Westwood moved closer to ending a two-year winless drought in adding a 6-under-par 66 to his opening round of 65 at Kuala Lumpur Country Club.

However, the action was overshadowed by Larrazabal needing on-course medical attention after being attacked by hornets at the 14th hole, the fifth of his round.

“They were three times the size of bees,” he said. “They were huge and like 30 or 40 of them started to attack me big time. I didn’t know what to do. My caddie told me to run, so I start running like a crazy guy, but the hornets were still there, so the other players told me to jump in the lake.

“I ran to the lake, threw my scorecard down, took off my shoes and jumped in the water. It was the scariest moment of my career, for sure. I’ve never been so scared.”

Larrazabal received medical treatment, including injections, for multiple stings. Then, in putting his shirt back on, the hornets also returned, so he played his last five holes in a borrowed shirt.

Incredibly, he birdied the 14th hole en route to a round of 68 and a share of 25th place on 2 under.

“It looks like I’ll be playing the weekend, so tomorrow it will be very, very scary to play that hole,” Larrazabal said.

In January, he defeated Phil Mickelson and Rory McIlroy to capture the Abu Dhabi Championship.

Former No. 1 Westwood picked up eight birdies with his only error being a double bogey when he found water guarding the green at the par-three 11th hole.

“On the front nine I shot 5 under for my second day running, and the longest putt I holed was from four feet on the first. It was solid stuff.

“I got a little unlucky at 11, it was one of the best shots I hit all day, and the wind just gusted on me and it came up short in the water. But I rallied after that.”

Antonio Lascuna from the Philippines carded 65 to hold the lead at 9 under before being overtaken by Westwood.

Lascuna has won twice on the Asian Tour, and he shares second place with Nicolas Colsaerts of Belgium, who has scored 66-69.

Defending champion Kiradech Aphibarnrat of Thailand was tied with Larrazabal after a pair of 71s.