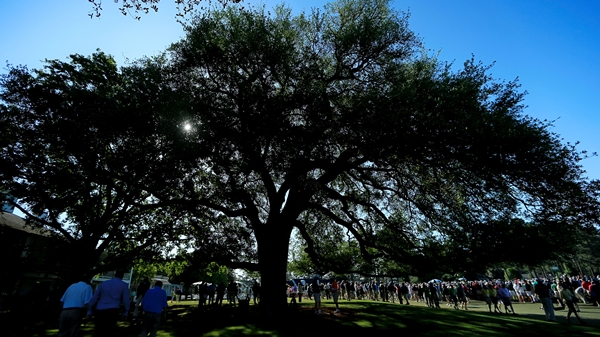 SAN FRANCISCO – The new Match Play Championship felt a lot like the old one Friday when one top seed after another began making plans to go home. Rory McIlroy kept some star power at TPC Harding Park with a comeback that shows why he is No. 1 in the world.

After making only one birdie, McIlroy finished with three in a row.

Facing elimination, he holed a 20-foot putt on the 17th to stay in the game. Another birdie followed to send it to overtime. And after another poor chip by Billy Horschel, McIlroy was on his way to the round of 16.

“I dug deep when I needed to,” McIlroy said.

Masters champion Jordan Spieth wasn’t so fortunate. Neither was Bubba Watson, Justin Rose, Dustin Johnson and Sergio Garcia. Only two of the top 10 seeds – McIlroy and Jim Furyk at No. 5 – reached the round of 16 that starts Saturday with single-elimination.

Spieth was all square in a back-and-forth match with Lee Westwood that featured chip-ins for halves on consecutive holes. Westwood delivered the clutch shot with a 6-iron to 12 feet for birdie on the 17th, and Spieth failed to birdie the 18th.

“Lee played well and pulled off the shots when he needed to at the end,” Spieth said. “And I didn’t.”

Furyk had to go 20 holes to beat Martin Kaymer, and then he went one extra hole as a spectator with plenty at stake. Furyk was only assured of winning his four-man group if George Coetzee beat Thongchai Jaidee. The South African won in 21 holes, and Furyk advanced because he beat Coetzee on Wednesday.

Friday was all about elimination, and it came in all shapes and sizes – a battle of undefeated players, a three-way playoff and some head-to-head tiebreakers.

McIlroy only had to beat Horschel, whom he hadn’t faced in this format since their contentious battles in the Walker Cup in 2007 when both were young and prone to irritate each other with their celebrations. McIlroy had only one birdie until making three straight at the end (one for a halve at the 16th), but none was bigger than his 20-foot putt on the 17th.

“It was either hole it or go home,” McIlroy said. “It was obviously the best putt of the whole day.”

Horschel missed his birdie putt to win the match. Horschel chipped too strong and missed another birdie putt that would have won the match on the 18th. Horschel squandered yet another birdie opportunity on the par-5 first hole after a perfect tee shot. And then on the par-3 second, he chipped too strong again and missed an 8-foot par putt that gave McIlroy the match.

There were no hard feelings. That Walker Cup was a long time ago and they get along just fine these days. This was a good match with no animosity.

“Not as much as Keegan and Miguel, apparently,” McIlroy said.

That would be Keegan Bradley and Miguel Angel Jimenez, who went nose-to-nose during a dispute about a drop Bradley took. It was a misunderstanding until Bradley’s caddie got involved, the Spaniard effectively told him to butt out and Bradley came to his caddie’s defense.

That was only a sideshow on a day filled with far more interesting developments.

– Four players who advanced were the lowest seed in their group, with John Senden (No. 60) easily advancing with a perfect record.

– Tommy Fleetwood of England had to play 58 holes to reach the round of 16 in his first Match Play Championship. Hunter Mahan also was 3-0 and still hasn’t seen the final three holes in any of his matches. Mahan, a past champion of this event, has played only 41 holes.

– McIlroy, Westwood, Gary Woodland and Louis Oosthuizen all won matches between players who had not lost. Oosthuizen struck a blow by beating Bubba Watson on the first extra hole.

– Fleetwood, Branden Grace and J.B. Holmes all advanced after losing their matches Wednesday. Holmes beat Brooks Koepka, who was eliminated in a tiebreaker. Grace, Zach Johnson and Charley Hoffman all finished 2-1, and Grace won with a birdie on the third extra hole.

– Rickie Fowler and Senden won their matches, even though they already were set for the round of 16.

Westwood and Spieth were all square when Spieth chipped in for birdie on the 15th, and Westwood halved the hole with a 10-foot putt. Westwood hit out of a bunker and clear over the green on the 16th, flubbed a chip and then halved the hole by chipping in for par.

Westwood hit 6-iron to 12 feet and gave a baby fist pump – rare emotion for the Englishman – when he made birdie, which spoke to the quality of the match.

“I think probably getting out of the group is really one of the toughest things his week,” Westwood.