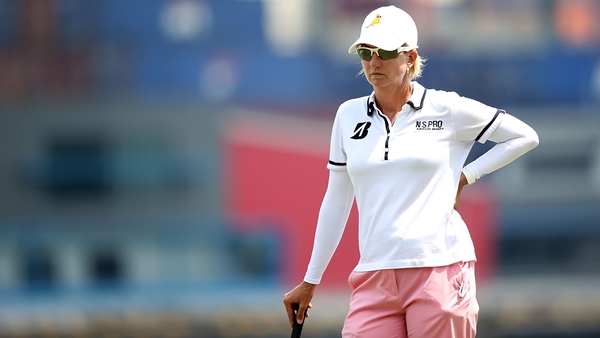 SINGAPORE – For all the talk of the youth movement in women’s golf, Karrie Webb showed on Friday that experienced players can still show up their younger competitors from time to time.

The 39-year-old Webb recovered from two bogeys on the back nine to card a 3-under 69 and open a two-stroke lead over 36-year-old Angela Stanford after the second round of the HSBC Women’s Champions.

Webb, who was at 9-under 135 overall, was quick to point out after her round that being older can have its advantages.

“Two old ducks, I guess,” she said about her and Stanford topping the leaderboard. “Did you ask any of the younger players if it’s hard to play against girls in their 30s? Because you always ask me the opposite question.”

Sweden’s Caroline Hedwall briefly pulled into a share of the lead with Webb on the back nine before two bogeys and a double bogey on her final three holes. She fell back to joint fourth at 4-under 140 with four others.

Webb, a seven-time major winner, has played some of her best golf in recent years this month. Two weeks ago, she captured her fifth Australian Open title in Melbourne, and now she holds the lead going into the weekend against a tough field in Singapore.

The Australian acknowledged that the younger players have forced her to step up her conditioning, something she does not enjoy.

“All these young players coming up are athletes,” Webb said. “For me, I’ve had to learn to get in the gym and do the work required.

“My workouts have just gradually increased so it wasn’t hard-core to start with, where I would have just hated it and never done it.”

Webb was pushed by one of the younger upstarts on tour, Hedwall, for much of the round on Friday.

The Swede, who has never won a LPGA title, sunk two long putts for back-to-back birdies on Nos. 7 and 8 and had a chance to pull even on the ninth but missed her 10-foot birdie putt wide. Webb followed with an 8-foot birdie putt that caught the edge of the cup and curled in, giving her a two-stroke cushion again.

Then came her bogeys on the back nine, however, which re-opened the door for Hedwall. Instead of capitalizing, though, the Swede suddenly faltered.

Faced with a tough chip shot on a steeply sloped bunker next to the 18th green, Hedwall swung once at the ball and missed. Then she swung again, and missed again. She finally got on the green with her third shot and two-putted to save the double bogey.

“It was just a bad lie and I was trying too hard to get it close,” she said. “It was just one of those moments when you want to walk off the golf course.”

Sweden’s Anna Nordqvist, winner of last week’s LPGA Thailand, made seven birdies for a 5-under 67, tied for the low round of the day. She was joint fourth with Hedwall and three Americans: Morgan Pressel (69), Paula Creamer (73) and Danielle Kang (70).

Pettersen has a chance to overtake Park in the rankings this week if she wins and Park finishes no higher than equal third.

Defending champion Stacy Lewis, meanwhile, struggled for the second straight day. She shot an even-par 72 to be tied for 39th.