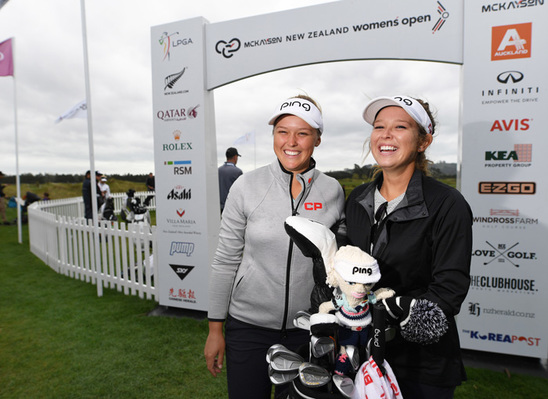 How low some of the world’s best women’s golfers can go this week at the MCKAYSON New Zealand Women’s Open will be determined by the weather gods, Canadian world no. 12 Brooke Henderson says.

With the fairways of the newly bedded in Windross Farm course east of Auckland firm and a touch unforgiving during practice and the wind gusting, scoring has been tough. However, if the wind drops, the links-styled course could well allow some low numbers when the tournament begins on Thursday.

“I think it really depends on the weather conditions and the direction that the wind is blowing,” Henderson said today following her practice round.

“It’s not a golf course [style] that I generally play a lot of; it’s playing very firm, which is partly because it’s so new of a golf course.

“I think if the wind stays up like it is right now, it is gonna be a challenge for the girls. If the wind dies and the conditions are still suitable, then the scores might be very low. I’m excited for the challenge, and hopefully good things will happen.”

Fifth on the 2017 money list with $US1,161,833 in earnings, the Ontario native arrives in Auckland in solid form, having posted a fourth career Tour victory in June at the Meijer LPGA Classic and followed up with a second at the KPMG Women’s PGA .

“I had a banner year last year; everything just seemed to be going perfect for me, and then this year, starting the season off it was a little bit tougher for me.

“But I won in June and finishing second in the Major championship that I won the year previous (PGA Championship) was definitely a lot of confidence for me, and a lot of momentum.”

Henderson said she expected her good friend Lydia Ko (the player she defeated in a playoff to claim that first major title in 2016) to relish playing on home soil in New Zealand.

“Back home I was able to play the Canadian Women’s Open, in front of my hometown, and that was a lot of fun for me. So, I feel like it’s a great opportunity for her.

“She’s an amazing player and I feel like she maybe hasn’t had the season she was looking for this year. But I know good things are gonna continue to happen for her and she’s getting it back on track.”