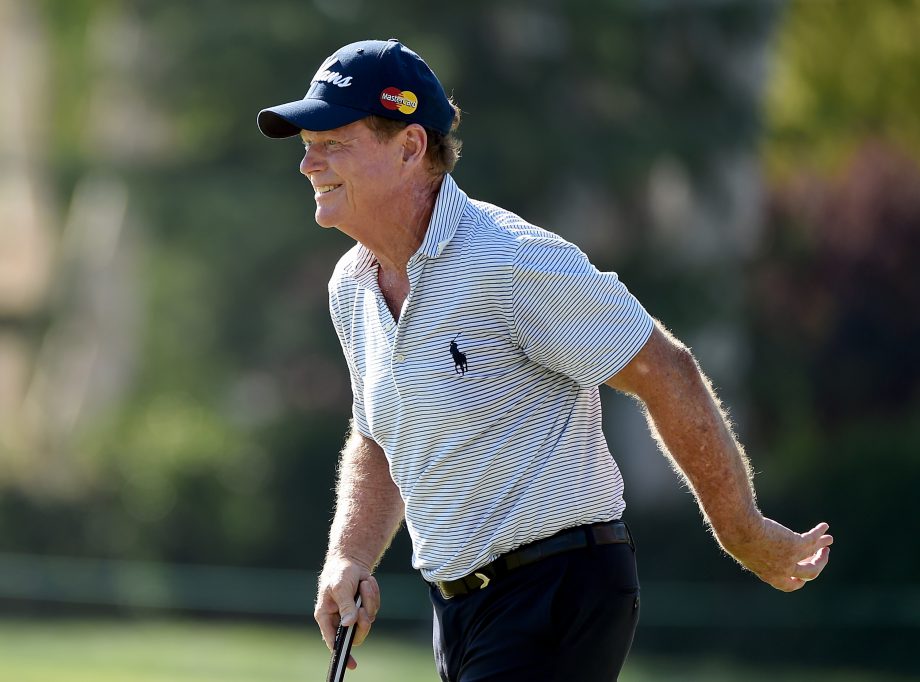 SACRAMENTO, Calif. – Tom Watson still gets quite a thrill seeing his name atop the leaderboard.

Watson withstood the scorching heat to shoot a 1-under 69 on Friday, finishing in a three-way tie atop the bunched leaderboard after the second round of the U.S. Senior Open.

“The illusion that I can still do it,” Watson said when asked what keeps him playing competitive golf. “I don’t have the tools in the toolbox I used to have. They’re missing. Some of the tools are missing. And so it’s getting more and more difficult for me to compete, but I still feel as if I can somehow get it done.”

Sure seems that way so far in Sacramento.

Watson was joined at 5 under for the championship by Jeff Maggert and Peter Fowler. Maggert shot a 65, and Fowler a 66 in their morning rounds.

But all the attention turned to the Hall of Famer heating up in the sizzling sunshine.

Watson made four birdies and three bogeys to provide the drama at sun-drenched Del Paso Country Club, where the temperature soared above 100 degrees again. Watson is trying to become the oldest winner of the event, the oldest to win a senior major and the oldest to win on the Champions Tour.

“To hit a shot under pressure that’s really a good golf shot is why I’m out here,” Watson said. “That’s what I like to do. And when I get to the point where I can’t do it or I can’t do it often enough to really satisfy myself, then I won’t be out here.”

It’s the fourth time Watson has held or shared the lead through 36 holes at the U.S. Senior Open. He has never won the event, which is in its 36th year.

A victory would be the exclamation point to his storied career.

Watson will play in his final British Open next month at St. Andrews. He’s the only man to claim the claret jug on five courses – but never at St. Andrews – and suddenly seems ready to be more than a feel-good story at the Old Course.

If he can sweat out the competition at Del Paso, Watson would be the oldest player to ever win such an event.

Allen Doyle was 57 when he won the U.S. Senior Open in 2006. Jock Hutchison was 62 when he won the Senior PGA Championship in 1947, and Mike Fetchick was 63 when he captured the Hilton Head Seniors Invitational in 1985.

“Not surprising. I don’t know what else to say about it,” said Rocco Mediate, who is at 2 under after a second-round 66. “He’s got very much control of his golf ball.”

Watson will have plenty of competition this weekend. Defending champion Colin Montgomerie (68), Bart Bryan (65) and Jim Carter (69) are all at 4 under, and several others are within striking distance.

The forecast highs are in the low 90s for Saturday and Sunday, with increasing wind. But neither the course nor the conditions have caused Watson much trouble.

In his opening round Thursday, Watson took advantage of the cooler morning conditions to shoot a 66. When he teed off Friday afternoon, the temperature was about 25 degrees warmer with almost no wind and climbed to 102 degrees in the afternoon.

“The heat wasn’t a big deal today. I was hydrated,” Watson said. “We kept in the shade most of the time, as much as we could. We played at a reasonably good pace.”

Watson controlled his irons, consistently found fairways and putted with precision. He birdied all three par 5s – laying up each time – but provided his most-crowd pleasing moment on the par-4 ninth.

Watson’s 20-foot putt stopped on the lip of the cup before falling in. That touched off the loudest roar of the week around the quant clubhouse, though Watson just straightened his shoulders and exhaled.

He stumbled a bit after the turn, with bogeys on the 10th and 13th. He got one shot back with a birdie putt from the fringe on the par-5 15th, raising his right hand in celebration.

Watson also saved par after hitting into the long, lush rough on No. 17, but he bogeyed on the 18th after his 10-foot putt stopped short – giving him something to think about heading into the weekend.

“I still have nerves,” Watson said. “If you don’t have nerves, you’re lying. The guys out here, if you’re playing in this competition, there’s an element of pressure that affects you. But the thing is I played under this type of pressure all my life.”

Stephen Ames posted a round of 71 today to sit T49 heading into the weekend. Canadian amateur Dave Bunker carded a 4-over 74 today but missed the 5-over cutline by two strokes. Also missing the cut was fellow Canadian Rick Gibson who turned in a second round 76.