Wagner leads, Hughes T10 as rain gets in the way at Safeway Open 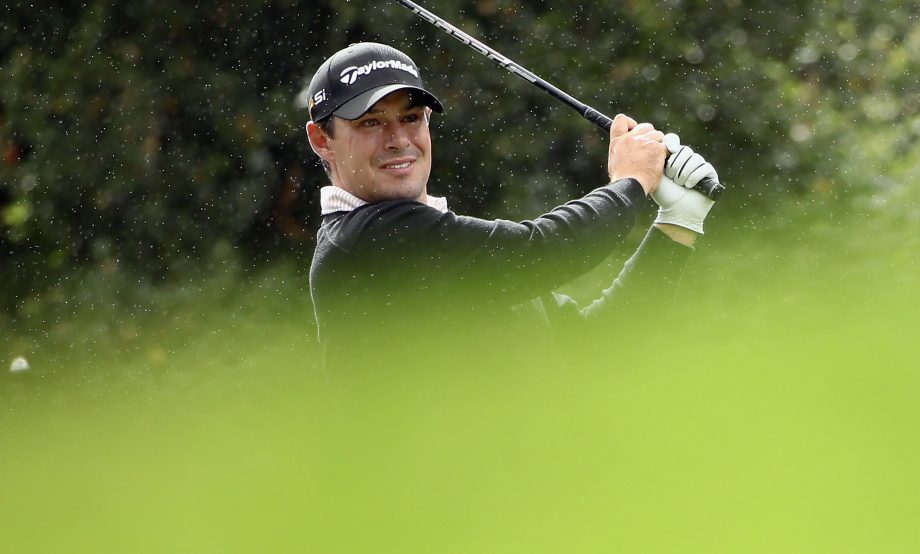 NAPA, Calif. – Johnson Wagner chipped in for birdie, and wound up taking a one-shot lead in the Safeway Open by keeping bogeys off his card as the rain began to pound Silverado on Saturday.

Wagner was at 15-under par through 15 holes when the third round was halted by the wet conditions. The course was playing so long and tough at that point that Wagner hit a driver and a fairway metal and still had a 9-iron for his third shot.

Scott Piercy, who had led from his opening 62 that set the course record, was one shot behind and just short of the par-5 16th in three shots when he told officials he couldn’t continue. The front of the green was one big puddle, and it wasn’t getting any better. Patton Kizzire also was 14 under through 16 holes.

Paul Casey, in the final group with Wagner and Piercy, was two shots behind. Casey hit a tee shot on the par-5 fifth hole that clipped a tree, ricocheted somewhere and was never found, costing him two shots.

Phil Mickelson hit a wild tee shot on the par-5 18th in the rain and made bogey for a 69, leaving him six back.

They were still in the game, mainly because of the rain. Shots became longer. Putts became more difficult to hole. The players still on the course, which included Martin Laird at 12 under through 16 holes, were to return Sunday morning.

Starting times for the final round already have been pushed well forward because of more rain in the forecast.

No person was more responsible for the PGA Tour’s season-opening event having a decent chance to finish than JT Poston. In his first PGA Tour event, he holed an 8-foot birdie putt on his final hole for a 69 that moved the cut line to 3-under 141.

That meant 70 players made the cut. His birdie knocked out 16 players.

Piercy still had the lead after finishing his second round in the rain-delayed event Saturday morning. He made only one birdie coming in for a 67, but that was enough to give him a three-shot lead over Casey and Wagner going into the third round.

Casey had another lost ball late in the second round, but this turned out much better. He was about 30 seconds away from abandoning the search when a spectator held up a ball with the Nike swoosh and a blue pen dot and said, “Is this it?” The spectator had found it in the hazard, so while Casey still had a one-shot penalty, he was able to drop away from the grandstands and save par for a 68.

Casey birdied the par-3 second hole in the third round from 6 feet, and he was on the verge of getting within one shot of Piercy with a 4-foot birdie putt on the next hole until he missed it. Two holes later, the lost ball led to double bogey.

Piercy dropped a shot on No. 6, though it was a good bogey. He was stymied by a tree from the fairway and right of the green, played back to the fairway and hit a 100-foot pitch-and-run to 2 feet. He also missed a pair of birdie putts inside 6 feet. One was at No. 8, downhill with a wicked break from right-to-left. The other was on the 10th hole.

Wagner, meanwhile, plodded along. He was short of the green on No. 8 when he chipped in for birdie, and his chip from short of the ninth green lipped out. He pulled within one shot of the lead with a short birdie on the 10th, and caught Piercy with a 30-foot birdie on the 12th.

Piercy fell out of the lead with a bogey from just off the 14th green.

Kizzire started the third round six shots behind and made up ground quickly with five birdies on the front nine, only one of them longer than 12 feet. He finally dropped back in the rain, three-putted the 14th when his birdie attempt rolled some 6 feet by.

Cody Gribble, the lefty from Texas, was having the best rookie debut and was three shots off the lead until a double bogey on the 17th. He was at 10 under and in the rough left of the 18th fairway when play was halted.

Right behind him was Canada’s Mackenzie Hughes. The Dundas, Ont., native was 9-under and had a share of 10th with the third-round set to resume Sunday morning.