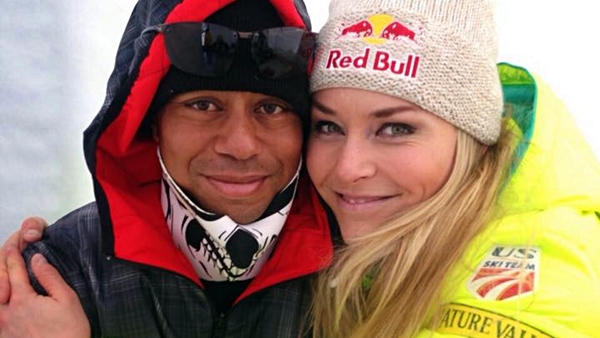 One day after winning her record 63rd World Cup race, Vonn posted to her Facebook account Tuesday that she was happy Woods surprised her by coming to the race, and that she felt “terrible that his tooth got knocked out.”

“When he was in the finish area a cameraman accidentally knocked into him and took out his front tooth,” Vonn wrote. “He was still in great spirits though and didn’t complain once or ask for any special assistance or security. We were both just happy to share the moment together.”

Vonn told USA Today in a phone interview: “I didn’t see it happen, but I guess some photographer hit him in the face with a camera and it totally knocked his tooth out.”

Woods missing a tooth created a sensation Monday after the race.

Mark Steinberg, Woods’ agent at Excel Sports Management, said in an email that during a crush of photographers at the awards podium, “a media member with a shoulder-mounted video camera pushed and surged toward the stage, turned and hit Tiger Woods in the mouth. Woods’ tooth was knocked out by the incident.”

Woods first showed up in the athletes’ area when Vonn’s father, Alan Kildow, escorted him in shortly after Vonn took the lead. The golfer then surprised Vonn and gave the skier an emotional hug.

After about 10 to 15 minutes of standing near Vonn with her family, Woods was escorted into a white tent usually reserved for measuring skis. He stayed there for nearly an hour, while the last lower-ranked skiers came down and during the podium celebration.

After the podium celebration, Woods was escorted by police to a waiting snowmobile and taken away.

Race organizers told The Associated Press they were not aware of the incident and that Woods requested extra security and a snowmobile to exit the finish area.

“I was among those who escorted him from the tent to the snowmobile and there was no such incident,” Nicola Colli, the secretary general of the race organizing committee, told The Associated Press. “When he arrived he asked for more security and we rounded up police to look after both him and Lindsey.”

Woods had been wearing a scarf with a skeleton pattern over the lower part of his face, sunglasses and a stocking cap.

This photo was taken when the scarf was lowered.

Steinberg, through a spokesman, said there would be nothing to add Tuesday.

Woods makes his 2015 debut next week in Phoenix.