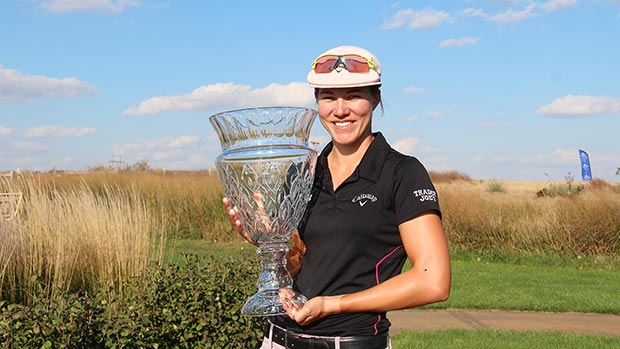 GARDEN CITY, Kan. – Vicky Hurst locked up an LPGA Tour card for next season, winning the Garden City Charity Classic on Sunday for her second Symetra Tour title of the year.

“I’m very excited,” Hurst said. “I’m a little bit relieved, too, because we only have three tournaments left and if it wasn’t here, it (finishing in the top 10) would only get tougher and tougher. I’m really proud of myself for playing well this week and the last couple of months and I’m looking forward to next year.”

Five strokes ahead entering round, Hurst played the first 13 holes in 2 over, rebounded with birdies on the par-4 14th and par-5 16th and parred the final two holes.

“The road back has been tough, anyone that plays professional golf knows,” Hurst said. “Last year, I had a little rut in my game and to be able to improve from that and build something positive this year has been huge. I’m excited to be heading back to the tour and play with the big kids again.”

Jersey’s Olivia Jordan-Higgins was second after a 68.

Israel’s Laetitia Beck followed at 5 under after a 66.

Canadian Anne-Catherine Tanguay shot a final-round 3-under 69 to move into a five-way tie for fourth. Fellow Canadians Augusta James and Samantha Richdale held shares of ninth at 2-under 214.