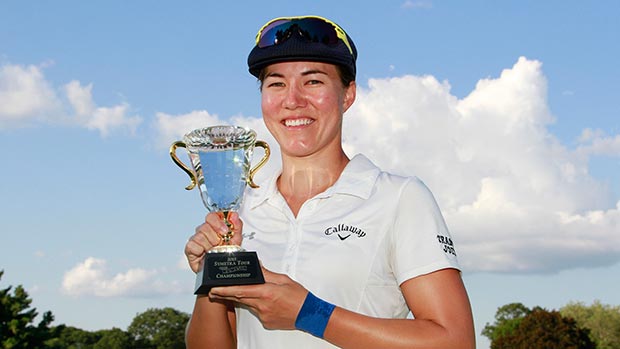 BROCKTON, Mass., – Vicky Hurst (Melbourne, Florida) was threatened early on the back nine, but managed to pull away towards the end to win her fifth career Symetra Tour event by carding a 3-under 68 on Sunday at the W.B. Mason Championship at Thorny Lea Golf Club to finish at 13-under 200. She closed three shots clear of Brittany Benvenuto (Langhorne, Pa.) and Alejandra Llaneza (Mexico City, Mexico).

With the win, Hurst moves from 25th to 14th on the Volvik Race for the Card money list.

“It feels really good, I haven’t won in six or seven years,” said Hurst, whose last win came on July 13, 2008 at the CIGNA Golf Classic. “It feels good to be back playing well and hitting it well so it was really exciting to be in the lead group and finish strong.”

Finish strong she did. The shot that ultimately won her the tournament came on the 14th hole. Hurst was 12-under at the time and she didn’t know that Llaneza had made double on the 14th hole to fall three back.

“I hit my drive through the fairway on 14 into the woods and I had 125 yards to the pin, but I really had to keep it low because of the trees everywhere,” said Hurst. “I hit a little punch 7-iron to about 10 feet which was pretty cool and I was able to make the putt which was big to get the momentum back.”

Hurst went onto birdie 15 to seize full control of the tournament. She made bogey on 16 and then par on 17 to take a three shot lead to the 18th. Hurst lagged her birdie putt to a foot and then tapped in for the win.

“I still was getting pretty nervous on the last few holes and on 18 I just wanted to find the fairway and green and lag it up there,” said Hurst. “It felt good to leave myself a one footer to win and it was pretty exciting.”

Hurst won her first Symetra Tour event at the age of 17 in 2008 and went onto win four official tournaments to lead the money list and earn an LPGA Tour card. At her peak in 2010 on the LPGA, Hurst earned over $400,000 and finished 28th on the LPGA Tour money list. She hit a low last year when she finished No. 162 on the money list and made south of $3,000 in 11 events.

“A year ago, I was pretty frustrated with my golf game and my injuries and I wasn’t really sure what was going to happen next because I didn’t know if my wrist would heal,” admitted Hurst. “I really worked hard with my coaches and my family has been great support emotionally and mentally. I came back to the Symetra Tour with a positive attitude, not a negative one, and that has really helped me.”

Hurst had two ganglion cysts in her wrist and a tear of the TFC (Triangular Fibrocartilage Complex).

Even the beginning of this season was a struggle for Hurst. In mid-July, Hurst was No. 127 on the Volvik Race for the Card money list. Over the last four events, she has moved to No. 14 with four top 11 finishes.

“My problem was off the tee. For the last year or so I really couldn’t hit the ball consistently off the tee and that is where I kept my focus,” said Hurst. “I worked closely with my coaches to fix my game and my swing and finally it is coming together. I’m hitting the ball long and straight and it feels good.”

Next up for Hurst is a trip to Pratville, Alabama to try and Monday Qualify for the Yokohama Tire LPGA Classic.

Llaneza moved from 5th to second on the Volvik Race for the Card money list with her tie for second.

“The first day I felt like I got off to a bit of a slow start,” said Llaneza, who carded a 1-over 72 on Friday. “I knew my swing was close and yesterday was really important. I found some good rhythm and tempo and I was able to carry that into today.

Benvenuto moved from 18 to 16 on the money list. The other big moves came from Lindy Duncan (Jupiter, Fla.), who finished in a tie for fourth to jump from 13th to eighth and Lee Lopez (Whittier, Calif.), who moved to No. 1 on the money list with a tie eighth.

The Tour takes two weeks off before heading to Sioux Falls, South Dakota for the Sioux Falls GreatLIFE Challenge at Willow Run Golf Club from September 3-6. The tournament is offering the largest purse, $210,000, in the history of the Tour.