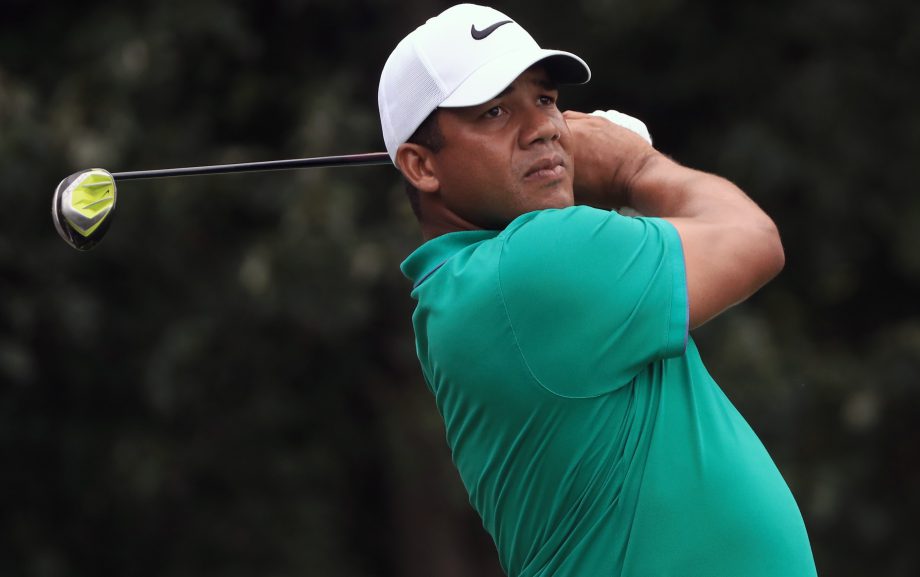 OPELIKA, Ala. – Jhonattan Vegas failed to qualify for the British Open, relegating the Venezuelan Olympic qualifier to the Barbasol Championship. So far, it has worked out quite well.

In far gentler conditions Friday morning than his peers faced across the Atlantic, Vegas shot a course-record 11-under 60, making a hole-in-one, another eagle and two closing birdies. He pumped his fist when his final 12-foot birdie putt dropped in on the par-4 ninth.

Tied for the first-round lead with Angel Cabrera after a 65 on Grand National’s Lake Course, Vegas had a six-stroke lead and a 17-under 125 total – a shot off the PGA Tour record for strokes in the first two rounds.

“In a great place, no question about it,” Vegas said. “There’s still a lot of golf to be played.”

He missed a chance to become the seventh PGA Tour player to shoot 59.

“When I got to 8 under, I actually let myself think a little bit about 59,” Vegas said. “It’s a lot of pressure and, two, it’s real demanding because you always want to keep it going, you don’t want to feel like you want to protect the score. At the same time you, just want to shoot as low as you can.”

“I had a perfect number, 190 yards is my 7-iron,” Vegas said. “I hit a great 7-iron. I mean, high, right at it, turning toward the pin and I knew it was going to be fairly close but never expected to go in. It was just a great feeling seeing that ball go in.”

“Obviously, I’m 10 under coming to nine. I know that I’m striking the ball well and I just wanted to be aggressive. That was my whole mentality coming into nine. I had 170 yards and hit a full 9-iron as far as I could and was able to make a great putt for a phenomenal round.”

Vegas has played the three par-5 holes in 8 under, making an eagle and two birdies each day. He won the 2011 Bob Hope Classic for his lone tour title.

Hudson Swafford was second at 11 under after a 63. He had an eagle, eight birdies and a double bogey.

“Saw Jhonny Vegas shot 60 today, that’s unbelievable,” Swafford said. “But I feel like I played pretty well today just to kind of maybe put a little heat on him on the weekend with some birdies. I don’t want just to sit around and try to make a bunch of pars so yeah, I’m pretty happy with today’s round.”

Former Auburn player Michael Johnson shot a 65 to reach 10 under in his pro debut.

Cabrera and David Hearn of Brantford, Ont., were 11 strokes back at 6 under.

Weyburn, Sask., native Graham DeLaet shot 69 to sit 2 under, and Nick Taylor of Abbotsford, B.C., missed the cut with a second-round 70.

Hunter Mahan also missed the cut with rounds of 74 and 70 in his first event since the birth of his third child.

The winner will get a two-year exemption and a spot in the PGA Championship, but will not be exempt for the Masters.