Vandette and Rheaume leading after round one of Canada Summer Games 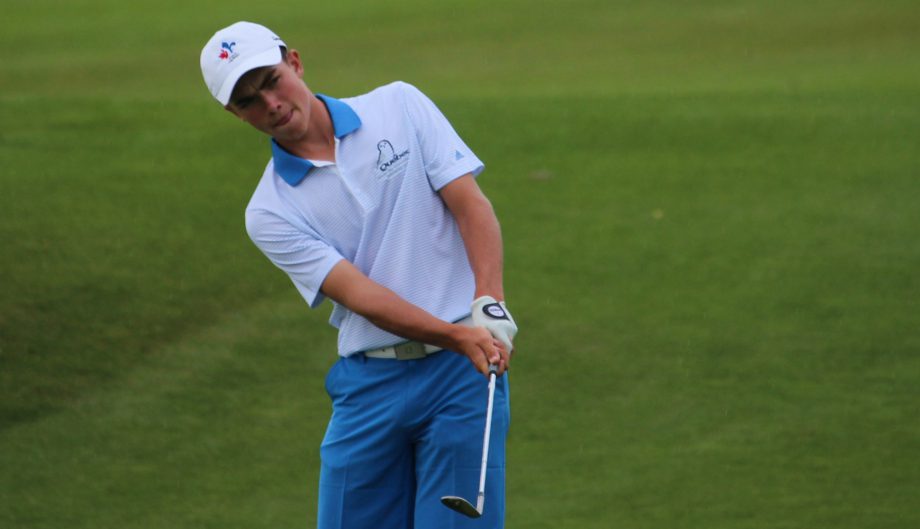 Quebec golfers are leading the way at Southwood Golf and Country Club in Winnipeg after round one of the Canada Summer Games. Christopher Vandette from Beaconsfield, Que., fired an opening round 5-under-par 67 to lead the boys’ division and Quebec City’s Sarah-Eve Rheame carded a 4-under-par 68 to sit atop the girls’ division.

Vandette – the third-place finisher at last week’s Canadian Junior Boys Championship – had a clean card in round one recording five birdies and no bogeys to sit two shots ahead of Winnipeg’s Ryan McMillan who posted an opening-round, 3-under-par 69.

“I hit it off the tee really well and hit a lot of greens, I was putting it close,” said Vandette. “Inside 10 feet I made a lot of putts.”

The 16-year-old’s only mistake was hitting it in the water on the par-5 13th hole.

“It was a reachable par-5, so I was able to recover and make par,” added Vandette. “Other than that, all day long I played well and kept it in the fairway.”

McMillan, who lives just 20 minutes away from Southwood and has played the course a dozen times, used that to his advantage when preparing for the Games.

“Normally when we’re out here playing it’s just hit it find it,” said McMillan. “But, the last couple times I was really thinking about what clubs I should be hitting off the tee and where I should be missing.”

The 2017 Manitoba Junior Boys Champion took advantage of his local knowledge pouring in four birdies in his opening round with the only blemish on his card coming with a bogey on the first hole.

Taylor Beckstead (Alliston, Ont.) is tied for third with Keaton Gudz (Victoria, B.C.) at 2 under par.

Vandette’s first round 67 has Quebec leading the team competition by three strokes.

On the girls’ side, Rheaume has a four-shot lead after her opening-round 68. She made only two bogeys in round one and her strong start to the Games was powered by three straight birdies on holes 13-15.

She’s playing Southwood for the first time this week and enjoyed her first competitive round at the Thomas McBroom track.

“It’s pretty flat around here, not much elevation,” said Rheaume. “It’s fun to play I liked it. I just need to keep hitting fairways and greens and making putts.”

B.C. teammates Alisha Lau from Richmond and Hannah Lee from Surrey are tied for second at even par along with Céleste Dao (Notre-Dame-de-L’Île-Perrot, Que.) and Ellie Szeryk (London, Ont).

On the strength of Dao and Rheaume’s strong starts, Quebec is leading the girls’ team competition with a 4-under-par 140 in round one, putting them four shots ahead of British Columbia who is even par (144). Ontario is in the bronze medal position at 146 (+2).

“It’s nice to help the girls for this first round,” added Rheaume. “Hopefully it goes well for us the rest of the week.”

Led by Vandette’s low round of the day Quebec also leads in the boy division at 6-under-par (138), three shots ahead of British Columbia who posted a 3-under par 141 in round one.

Manitoba is in third at 1 under par.

British Columbia is the two-time defending champion in the male and female individual and team events – the only province or territory to win a gold medal at the Canada Summer Games since golf became part of the Games in 2009.