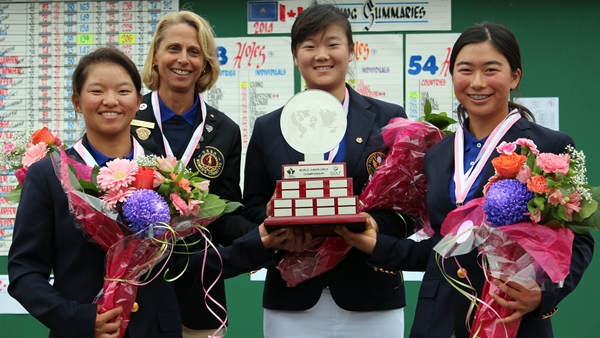 Markham, Ont. (Golf Canada) – Team USA got out to an early lead and never let it go, finishing with a team-total score of 17-under par 559 for the wire-to-wire victory at the inaugural World Junior Girls Golf Championship at Angus Glen Golf Club (South Course) in Markham, Ont.

For Team USA non-playing captain Courtney Myhrum, the victory capped a special week that left her beaming with pride for her young squad.

“They’re my dream team, it’s been wonderful it’s been a great week and a real team effort; I couldn’t be more proud of the three of them, the way they conducted themselves on the course and off the course,” said Myhrum. “Go play and have fun, there is really not much else I can say to these three. They had great course management and are really easy to captain because they know how to get around the golf course – they didn’t really need me this week.”

In the individual competition, 15-year old American standout Mika Liu (70-69-67-73—279) shot a final-round, 1-over 73 to win the gold medal by three shots over her USA teammate Megan Khang (67-73-70-72—282). Liu came into Wednesday’s final round with a four-shot lead over Khang and was more excited to contribute to the team victory than capturing individual gold.

“Yes, I am extremely happy that my team won first and that I did too – it is a total celebration,” said Liu, the no. 48 ranked player on the World Amateur Golf Ranking. “To be able to share the podium with my teammates who were out there on the course with me and my captain and manager makes me extremely happy and proud because we came here together and we are able to leave as champions together.”