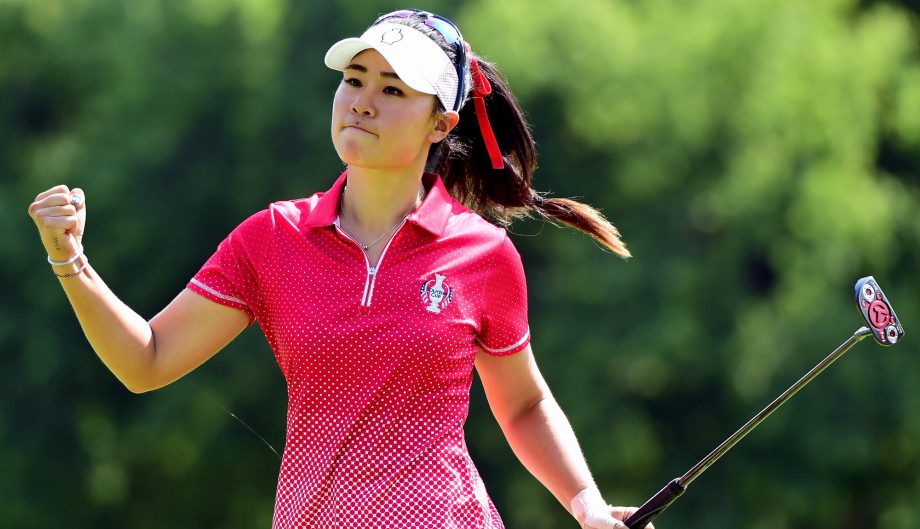 The favoured Americans found themselves trailing Europe after a sluggish start to the Solheim Cup.

The U.S. settled down on Friday afternoon, pulling away with a record-setting fourball performance.

The United States swept the afternoon fourball matches to take a 5 1/2-2 1/2 lead at Des Moines Golf and Country Club.

Lizette Salas and U.S. newcomer Danielle Kang each won two matches, teaming to beat Carlota Ciganda and Caroline Masson 1 up for the Americans’ lone full point in the morning foursomes, then leading the U.S. to its first ever fourball sweep in the afternoon.

“This is the history we really don’t want. We want the history on Sunday night. We want the Cup,” U.S. captain Juli Inkster said. “We’ve got a lot of work (ahead). I know (European captain) Annika (Sorenstam) is going to get that team fired up.”

"I loved the fans on the 1st tee – they were so happy and having fun and hope they will stay our fans forever" @daniellekang #Solheim2017 pic.twitter.com/xfALfz39yp

In the other fourball matches, Brittany Lincicome and Brittany Lang beat Masson and Florentyna Parker 3 and 2, and Stacy Lewis and Gerina Piller edged Charley Hull and Georgia Hall 2 and 1

In the morning foursomes, Americans Cristie Kerr and Lexi Thompson rallied to halve with Hull and Mel Reid. For Europe, Hall and Anna Nordqvist beat Paula Creamer and Austin Ernst 3 and 1, and Karine Icher and Catriona Matthew topped Lewis and Piller 1 up.

The U.S. would find a lot more success in fourball play – dominating so thoroughly that it never trailed in any of the four matches.

Salas and the 18-year-old Yin set the tone for the afternoon. Salas opened with three straight birdies to win those holes, and wins on consecutive par 5s helped the duo end the match in 13 holes.

The 6-and-5 win was the second-largest in Solheim history.

“Everything kind of fell together,” Salas said.

Kang’s putting was solid throughout the day – and back-to-back birdie putts sealed her and Wie’s win after 17 holes.

Lincicome and Lang improved to 3-0-0 as a four-ball tandem, and Lewis made a short birdie putt on No. 17 to complete the sweep.

“It was beautiful. Never seen anything prettier,” Lang said about seeing the leaderboard lit up in the Americans’ red colour.

Thompson, fueled by a surge of adrenaline provided by the pro-American crowd singing songs and chanting “USA! USA!” drilled her tee shot on the first hole to set up Kerr’s 12-foot eagle putt to open the three-day, biennial event.

But the Americans stumbled, and they appeared to be finished after Hull’s long birdie chip on No. 16. Thompson birdied the next hole, and Kerr halved the match with another 12-footer on 18 – pumping her fist in the air before the ball even dropped in.

“It was pretty much a you-know-what sandwich out there,” Kerr said. “I’m glad it ended up the way it did.”

Nordqvist dealt with a case of mononucleosis this summer. But she and Hall, playing in her first Solheim Cup, cruised to the only point that came easy for the Europeans.

Europe will likely need Nordqvist and Hall’s teammates to emulate those performances if it hopes to pull closer to the surging Americans.

After more foursomes and fourballs Saturday, the event will closes with 12 singles matches Sunday.