US rebounds to win twice in International Crown 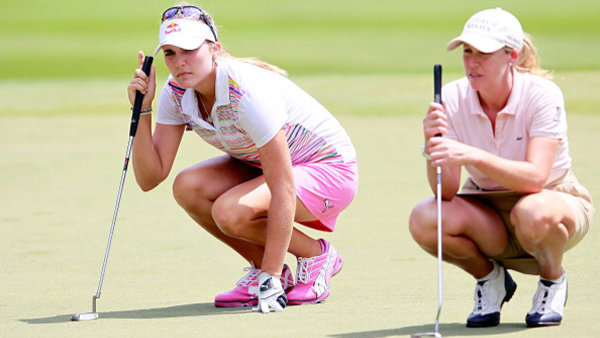 OWINGS MILLS, Md. — The United States shuffled its lineup in the second round of the International Crown and got the desired result, beat Spain twice Friday to earn its first points in the eight-country competition.

Lexi Thompson and Cristie Kerr took control on the back nine against Belen Mozo and Beatriz Recari in a 3-and-2 win, and Paula Creamer and Stacy Lewis held on to beat Azahara Munoz and Carlota Ciganda 2 up.

One day earlier, the top-seeded U.S. lost twice to Taiwan and was the only country without a point.

That caused Lewis to say: “Well, I guess we learned that those pairings didn’t work very well.”

Thus, the Americans traded partners Friday – and the new teams proved to be far more productive.

The Kerr-Thompson pairing won holes 10-12 to go 3 up, and Creamer-Lewis took the lead for good by winning No. 7 before adding to their advantage on Nos. 9 and 11.

Munoz and Ciganda got to 1 down heading to 18 before both landed shots in a bunker, and they ended up conceding the hole.

Thailand leads Pool A with five points, followed by Taiwan and the U.S. with four points apiece and Spain with three.

Japan stands atop Pool B with six points. South Korea has four points and Sweden and Australia each have three.

On Saturday in the final day of better-ball play, the United States will face Thailand, and Spain will play Taiwan. In Pool B, Sweden will face Australia, and South Korea will play Japan.

The top two teams in each pool, along with the winner of a playoff between the third-place teams, will compete in singles matches Sunday for the inaugural International Crown title.

Thailand moved atop Pool A with a pair of wins over Taiwan, which wasn’t able to sustain the momentum it generated with twin wins over the U.S. one day earlier.

Moriya Jutanugarn and younger sister Ariya Jutanugarn of Thailand teamed to beat Candie Kung and Teresa Lu 3 and 2. The Jutanugarns took the lead with birdies on the par-4 first and did not lose a hole all day.

Thailand’s other tandem, Pornanong Phatlum and Onnarin Sattayabanphot, beat Yani Tseng and Teresa Lu 1 up with a birdie on the 18th hole.

Next up for Thailand: The Americans.

“We’re probably going to try to keep the same confidence like today, and then just go have fun,” Sattayabanphot said. “Let’s see how it goes.”

In Pool B, Japan’s Ai Miyazato and Sakura Yokomine rallied from six holes down with seven to play to halve with Katherine Kirk and Lindsey Wright of Australia. The comeback ended with Japan capturing the final three holes.

“It feels amazing right now,” Miyazato said. “Until 12 holes, I and Sakura just felt like today was Australia’s day. We tried to accept the results, and said that every extra hole is just a bonus.”

Kirk said, “It hurts, obviously, but we can’t change what happened. But we can certainly learn from it and certainly go out there (Saturday) and try to make amends.”

The tide turned after the Australians were put on the clock on the 12th hole.

“We lost our timing and that was pretty much it,” Wright said. “It was just awful.”

In another matchup, Sweden split with South Korea. Caroline Hedwall and Anna Nordqvist beat South Korea’s Inbee Park and So Yeon Ryu 1 up, and Na Yeon Choi teamed with I.K. Kim to edge Pernilla Linberg and Mikaela Parmlid 1 up.