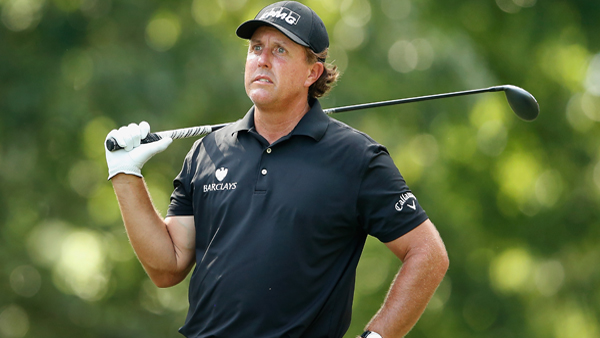 PINEHURST, N.C. – Even in the best of times, Phil Mickelson has ample reason to expect the worst at the U.S. Open.

More than two decades of play in the major known as the toughest test in golf has produced everything from agony to aggravation, mostly torment, never triumph. And all Mickelson has to show from the U.S. Open are silver medals – a record six of them – for finishing second.

“He could have won six, and he hasn’t won one,” Ernie Els said. “I believe he’s going to win one. He’s still young enough. His game is still good enough.”

The U.S. Open took on even greater importance to the 43-year-old Mickelson last summer when he won the British Open at Muirfield, leaving him one major away _ the U.S. Open, of course _ from joining five other greats who have the career Grand Slam.

For all his heartache in golfs toughest test, his optimism hasn’t wavered.

Never mind that he has been linked to an insider trading investigation involving activist investor Carl Icahn and Las Vegas gambler Billy Walters, in which FBI agents paid him a visit after his first round at the Memorial. Or that Mickelson hasn’t won this year, his worst start to a season since 2003.

“Some people view it as though, ‘He’s come close and he’s never done it.’ I see it as though I’ve finished second six times in this event,” Mickelson said. “I played some of my best golf in this event, and I should have an opportunity – and more than one opportunity 0 to close one out here in the future.”

The U.S. Open returning to Pinehurst No. 2 only adds to the intrigue.

That’s where Mickelson picked up his first silver medal in 1999. He had a one-shot lead with three holes to play and had a 6-foot par putt on the 16th hole, while Payne Stewart was 25 feet away from par. Stewart made his putt, Mickelson missed and they were tied. Stewart took the lead with a short birdie on the 17th, then famously won the U.S. Open with a 15-foot par putt on the final hole.

No worries. Mickelson surely would get another chance, and he did.

He just doesn’t have the trophy.

Five years later, he was tied for the lead on the 17th hole at Shinnecock Hills when he hit into a bunker, blasted out to 5 feet and three-putted for double bogey.

“It was like being in a morgue walking up the 18th,” said Fred Funk, who was paired with him that day.

The most crushing blow was at Winged Foot in 2006. Mickelson had a one-shot lead on the 18th hole. His tee shot clanged off a corporate tent. The bigger mistake was going for the green with a 3-iron and hitting a tree. His third shot plugged in the bunker. His fourth shot raced across the green. He made double bogey and lost my one.

There was Mickelson, crouched on the green, hands cupped over his head. “I am such an idiot,” he said.

“Phil handled the whole thing like a true gentleman,” said Kenneth Ferrie, who played with him in the final pairing. “He had nice words to say to me coming off 18 and was amazingly courteous and polite to the volunteers and officials considering what had just happened.”

And yet he keeps coming back for more.

Sam Snead, who holds the PGA Tour record with 82 career wins, never won a U.S. Open. Lee Trevino never won the Masters. Arnold Palmer and Tom Watson never won the PGA Championship. Even so, none of those greats ever had as many chances to win the missing major as Mickelson.

Hunter Mahan paid him the ultimate respect at Bethpage Black in 2009. Mickelson was tied for the lead with four holes to play until missing short par putts on the 15th and 17th holes. Another U.S. Open bid over, Mickelson was walking up to the 18th green when Mahan _ who had just as good of a chance to win that day – began applauding, and thousands joined him.

Mahan has played with Mickelson twice on Sunday when Lefty was the runner-up. The other occasion was last year at Merion. Mickelson twice made bogey with a wedge in his hand on the back nine. His last hope was to chip in from 40 yards to force a playoff with Justin Rose. He missed.

“I looked at him and said, ‘Good try, Phil.’ You can only do what you can do,” Mahan said. “At some point, you’ve got to get a bounce or two and make a putt. I think he wants to win that tournament more than anything.”

The thought of Mickelson at Pinehurst stirs emotions. Stewart died in a freak plane crash four months after he won that U.S. Open. Mickelson carried a pager in his golf bag that week and pledged to withdraw if his wife went into labour. His first child, Amanda, was born the next day.

Fifteen years later, the pressure is only greater.

“Maybe it is his strength of mind, or his short game, that has enabled him to put himself in contention as so many times,” Ferrie said. “As each year has gone on and he has won other majors, the focus has become more and more about the U.S. Open. As a player, when you want something so much, it’s even more difficult to achieve. Yet he keeps giving himself a chance.”