US, Europe vie for underdog status ahead of Solheim Cup 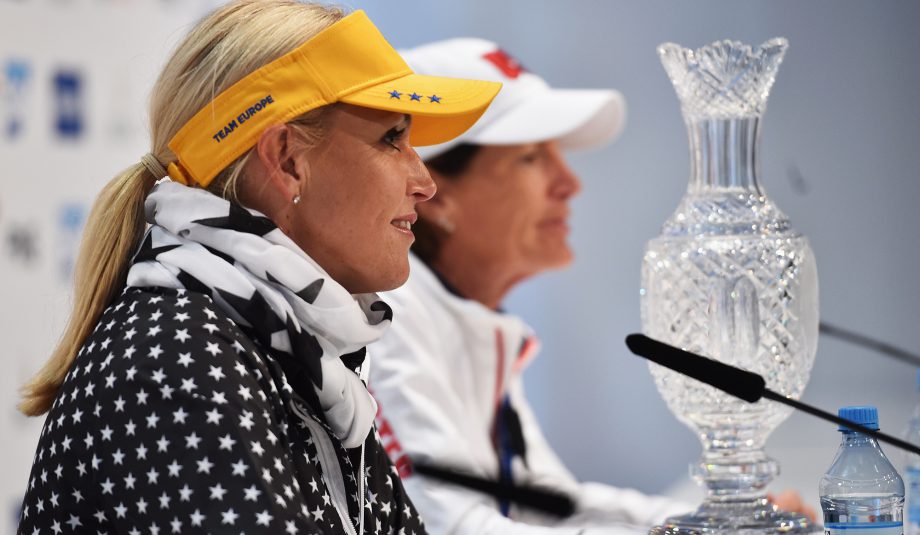 Going into the Solheim Cup, both teams seem to be fighting for the status of underdog.

The Europeans and Americans have both been trying to dampen expectations before the tournament gets underway Friday.

It’s the biggest prize in women’s team golf and the U.S. can point out that Europe is playing at home and going for three in a row, having captured back-to-back titles for the first time in 2013.

But Europe team captain Carin Koch insists the past will have no bearing at all on this weekend’s competition at the St. Leon-Rot Golf Club near Heidelberg in Germany, and she pointed to the strength of the American team based on the rankings.

“They’re so much higher-ranked than we are,” Koch said. “This is Solheim Cup 2015 and we start from scratch.”

“World ranking-wise their average would certainly be a lot higher than ours. They’re going to go in here as favorites,” said the 46-year-old Matthew, who will be making her eighth Solheim Cup appearance.

Ten of the American players are in the top 40, while Europe have three, but Angela Stanford believes the Europeans’ point is moot.

“People say, `on paper.’ Well, paper doesn’t play,” the 35th-ranked Stanford said. “When you get out on the course it’s golf and it’s match play, and absolutely anything can happen. And you can’t put on paper somebody’s heart. It’s hard to say (whether) there’s a favorite or not.”

Both teams feature a mixture of youth and experience. Alison Lee, who played her way onto the U.S. team as an LPGA rookie this season, is the only newcomer on either team.

“I’ve played more golf this year than I’ve ever played in my life,” the 20-year-old Lee said.

“This team is really connected,” said Inkster, a seven-time major winner. “They’re older. They kind of get what this is about. It’s not about them. It’s about . this is a lifetime experience in one week. And I want them to have a good feeling about this week.”

Lincicome, Kerr, Thompson, Pettersen and Nordqvist all have LPGA Tour victories this season.

Wie, who is 6-5-1 in three previous appearances at Solheim, has overcome a frustrating season hampered by injuries, but she appears to have put the problems behind her. She tied for 16th last week in France at the Evian Championship, her best finish since returning from a left ankle injury. For a time, it wasn’t looking good.

“There are some conversations when I talked to Juli, honestly I told her I don’t know if I could play or not. But the past month, it really has been night and day. I played last week with no pain, knock on wood. And this week, too,” Wie said on Wednesday. “I feel great. I feel really good this week. I’m excited to be here. I’m just ecstatic to be here.”

Koch brought Caroline Hedwall of Sweden, Karine Icher of France, Caroline Masson of Germany and Matthew back to the European team with her four picks. They all played in Colorado in 2013, when Hedwall became the first player to win five out of five matches. She retained the cup for Europe by winning the 14th point.

“For the last year I’ve been hitting the ball really well but I just haven’t putted that well. It kind of was the same situation when I came into the Solheim in 2013 – I didn’t make many putts and all of sudden it works. I’m kind of hoping for some magic this week, too,” said the 26-year-old Swede. Hedwall was also on the winning team in 2011.

The rest of the European team is made of Suzann Pettersen of Norway, Charley Hull and Melissa Reid of England, and Gwladys Nocera of France, who qualified from the Ladies European Tour points list, as well as Anna Nordqvist of Sweden, Azahara Munoz of Spain, Sandra Gal of Germany and Carlota Ciganda of Spain, who earned their spots through their world rankings.

The U.S. leads the series 8-5 overall. The 2017 matches will be played at Des Moines Golf and Country Club in Iowa.