Thunderbirds leading the women’s draw, men’s delayed after round one of the Canadian University/College Championship 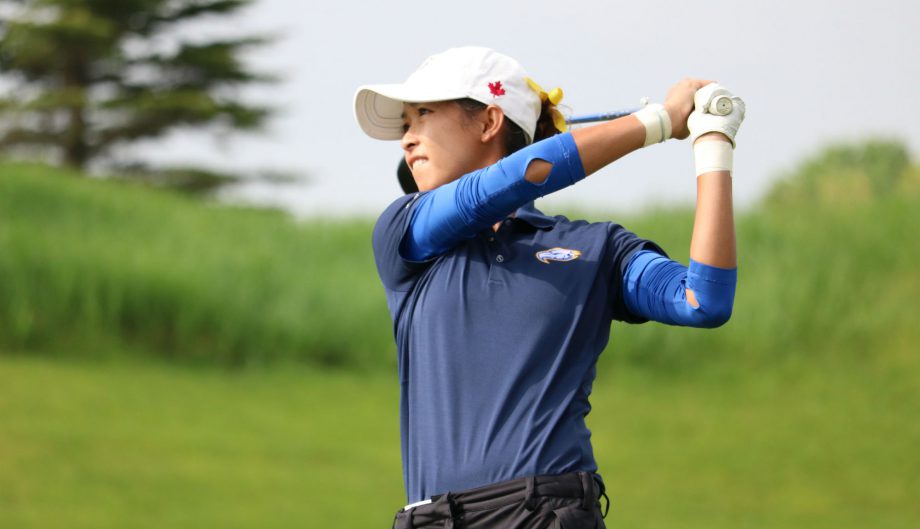 On day one of the weather-shortened Canadian University/College Championship, defending champion Kat Kennedy of Okotoks, Alta., fired an even-par 72 to help put the University of British Columbia Thunderbirds on top of the women’s team competition. The men’s side of the draw was unable to finish the first round due to inclement weather.

“It’s a challenging course. I think learning to be patient is key here, the wind picked up on the back nine and I think just keeping the ball in play and trying to hit the green in regulation was my goal for the day,” said Kennedy, from the scoring table following her round.

With a combined score of 19-over par, the Thunderbirds are 11 strokes ahead of the second place University of Fraser Valley Cascades, who posted a team score of 30-over par on day one. The University of Victoria Vikes sit third at +32.

After starting strong with birdies on the first and second hole, Kennedy made a bogey on the third. She recorded another bogey on seven, but rebounded with a birdie on eight to make the turn at 1-under par. On the back nine Kennedy made a five-foot birdie putt to finish her round as the only player not over par.

In her final university season Kennedy had a stellar year. She was first or T1 five times and set a school record for the lowest single round score when she posted a 67 on the second day of the Grand View Battle at Primm, in Nipton, Calif., from March 20-21.

Coquitlam, B.C., product Sharon Park, a freshman at Fraser Valley, is second in the women’s individual competition at 4-over par (76). Kennedy’s teammate, 22-year-old Winnie Hyun, from Langley, B.C., rounds out the top three at +7 (79).

When play was suspended at 5:46 p.m., Wilfrid Laurier University Golden Hawk Eric Flockhart from Mississauga, Ont., had posted the lowest men’s score at 2-under par (69) thanks to three straight birdies to close out the round.

“I was getting the same kind of breaks on the front nine, but I just couldn’t buy a putt,” said Flockhart. “I got to the back made a good one from about 10 feet on 10, made a few good par saves and then 14 to 18, I made five putts in a row basically, so the putts started to fall.”

Flockhart had a very strong Ontario University Athletic Association (OUA) season in the fall, including a stretch where he won three straight tournaments—the Waterloo Invitational, the Guelph Invitational, and the University of Toronto Invitational.

The University of Victoria Vikes are currently the leading team at 9-over par through 14 holes of play, with the first round resuming Tuesday morning at 7:30 a.m. They are followed by the University of Manitoba Bisons and the Queens University Gaels, who hold second place in the weather-delayed first round at 11 over par. The Wilfrid Laurier University Golden Hawks are the lowest team in the clubhouse at 14-over par.

Check out all the pictures from Monday’s action during Round 1 of the #CDNUnicollege @TangleCreek ?️?⛳️

The University of Toronto’s Kevin Fawcett, a product of Newmarket, Ont., was the second-lowest player to finish his round, posting an even-par 71. Lawren Rowe, (Victoria, B.C.) of the University of Victoria Vikes, is, 1 under par through 14 holes.

The first round will resume tomorrow at 7:30 a.m. Second round tee times will begin at 8:30 a.m. For additional information on the championship click here.