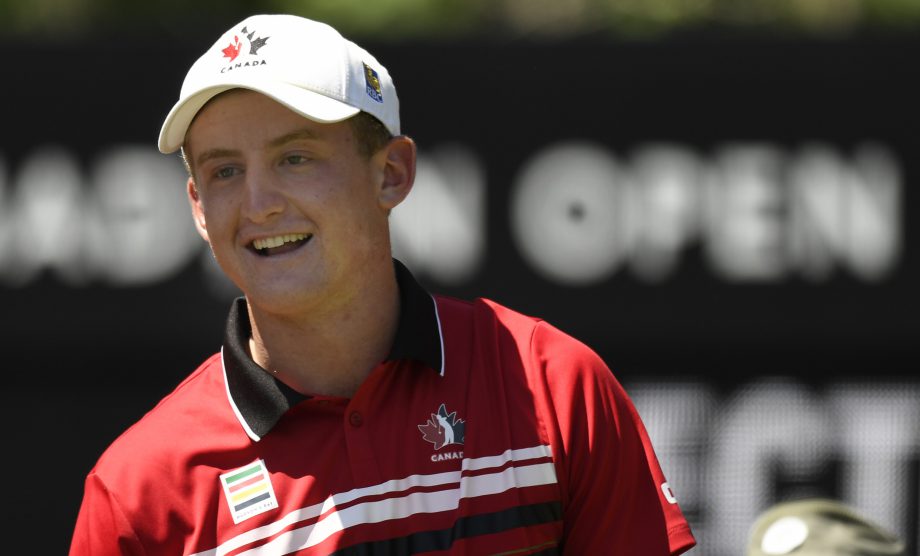 The 21-year-old Canadian closed out the second round of the RBC Canadian Open on Friday with three consecutive birdies to tie for third with Rahm and American Kelly Kraft at 6-under par. Rahm and du Toit were teammates at Arizona State University last season and were roommates when the team was on the road.

“I’m playing out of my mind and I still can’t beat him,” said du Toit, with a laugh. “That was school, that was last semester, just in a nutshell right there.”

Du Toit, from Kimberley, B.C., is the low Canadian and low amateur at the PGA Tour event, hanging with seasoned professionals. For three holes he was tied for first with superstar Dustin Johnson and co-leader Luke List at 7-under par. A triple bogey on the par-5 No. 2 hole at Glen Abbey Golf Club knocked du Toit down the leaderboard, but he climbed back up thanks to the steady hand of Sean Burke, his caddy for the week.

“He kind of, you know, theoretically cracked me in the head and said ‘hey, get your head back in the game and stick to the game plan and keep doing what you’re doing,”’ said du Toit of his caddy’s advice.

Rahm and du Toit shared a brief moment together outside the official scorer’s tent on Friday as they crossed paths. Rahm, who was finishing with the morning group as du Toit was heading out to the course, gave the younger player some advice.

Only three other Canadians out of a field of 14 home-grown players made the cut on Friday.

Adam Hadwin of Abbotsford, B.C., was much sharper, improving on his first-round par performance with a 2-under 70 to tie for 21st. Amateur Garrett Rank (75) of Elmira, Ont., was tied for 36th at par, while Corey Conners of Listowel, Ont., just made the cut at 2 over.

Conners shot a 3-over 75 on Thursday and thought he’d played his way out of the event Friday after he double bogeyed on No. 9, his final hole of the second round. He finished with a 1-under 71 on Friday, putting him at 2-over par on the tournament, which, at the time, was a shot over the cutline.

“It’s over with now, but yeah, a little sour taste I guess on the final hole,” said Conners, who left the course before the projected cutline was moved, extending his weekend.

“It’s obviously disappointing but it’s another golf tournament, and I’m able to kind of get over it a little bit easier now than I used to be probably,” said DeLaet, who will represent Canada in men’s golf at the Rio Olympics along with Hearn. “Obviously I wanted to play well here this week, but there’s more tournaments to play.”