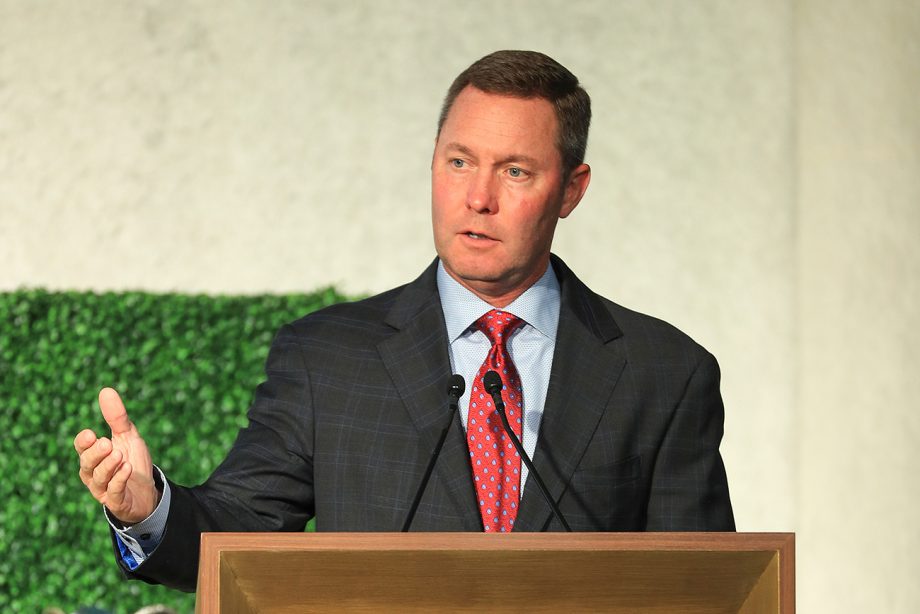 LIBERTY CORNER, N.J. (Feb. 17, 2021) – The USGA announced today that Mike Whan will join the organization this summer as CEO, and will become the eighth top executive in USGA history. Last month, Whan announced his intention to step down as LPGA Commissioner in 2021, after his organization completes a search for the next Commissioner. His transition follows an impressive 11 years at the helm of the LPGA, during which the organization experienced historic growth in virtually every aspect of the business. As USGA CEO, Whan will be responsible for leading all aspects of the association’s operations, including its core functions, essential programs, and human and financial resources. He will also represent the USGA on a variety of national and international boards.

“Mike Whan is a proven, successful and transformative leader, not only in the golf industry but throughout his entire career,” said USGA President Stu Francis, who oversaw the CEO search process. “He has shown a unique ability to understand how the environment is changing in global golf and how to quickly and thoughtfully adapt an organization to meet those changes. Importantly, Mike is already a trusted peer for so many key stakeholders in the industry, and his existing relationships will not only help the USGA, but will also help advance the game.”

Since joining the Ladies Professional Golf Association in 2010, Whan increased the number of tournaments on the LPGA Tour’s schedule to 34 from 24, increased purses from $41.4 million to $76.5 million, and grew television hours from 125 hours per season, to over 500 hours. Under his leadership, the LPGA became a truly global business – with players, tournaments, sponsors and fans coming from all over the world. Currently, the LPGA Tour is televised in over 170 countries each week. Whan’s leadership resulted in the expansion of the LPGA to now include both the Symetra Tour, the recently announced joint venture with the Ladies European Tour, as well as a nearly 50% increase in LPGA’s teaching division. Whan’s focus on growing the game for junior girls has led to a significant expansion of the LPGA-USGA Girls Golf Program, which had 5,000 members when he joined the organization to 90,000 girls now engaged in the program.

“As someone who grew up loving this game, I have always had huge respect for the USGA and its role in leading our sport,” said Whan. “The game has given me so much throughout my life, both personally and professionally. I know I have a lot to learn, but I’m truly excited about this role, as it gives me the opportunity to not only give back to the game, but to also work hard to leave it stronger.”

Current USGA CEO Mike Davis, who joined the USGA in 1990 and became the Association’s seventh executive director in 2011 and first CEO in 2016, will depart later this year to team with Tom Fazio II in a new course design venture, Fazio & Davis Golf Design.

“I’ve had the pleasure of working with Mike Whan for many years and I view him as a trusted, strategic leader who has a proven track record of building collaborative partnerships,” said Davis. “I know the USGA will be in great hands, and I look forward to partnering with Mike to ensure a smooth and successful transition for the USGA.”