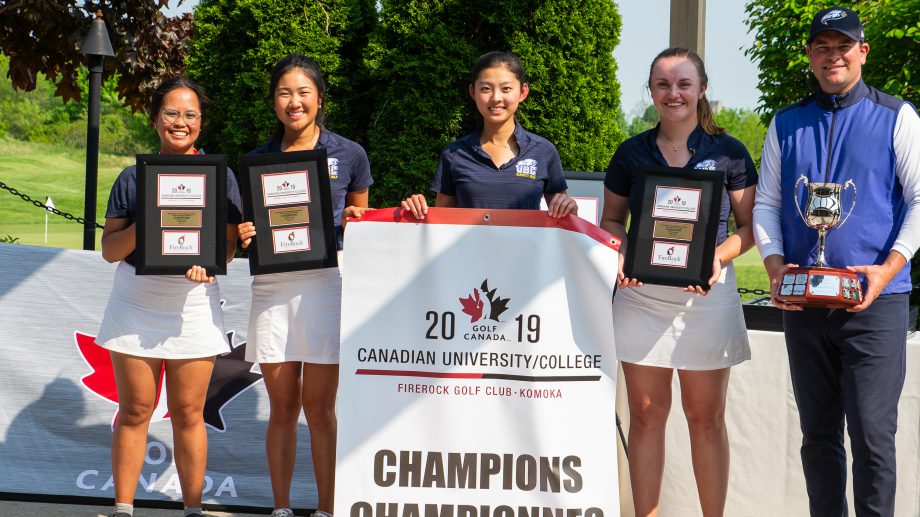 KOMOKA, Ont. – A tight leaderboard got even tighter as the final round progressed, but it was the University of British Columbia (UBC) Thunderbirds who came from behind to win both the men’s and women’s team divisions at the Canadian University/College Championship at FireRock Golf Club on Friday.

It took a playoff for the men’s team to secure the victory, after they charged up the leaderboard in the final round. The Thunderbirds erased a nine-stroke advantage held by the Western Mustangs by shooting 12 under par as a team on Friday.

“I’m just excited for them,” said Chris MacDonald, head coach of the UBC men’s and women’s teams. “It was a tremendous day, and probably our best day of the year on the golf course together, so it’s a fun thing to see.”

The men’s individual division featured a packed leaderboard, with four players having a share of the lead at one point on the back nine. A playoff was needed to separate Charles Fitzsimmons and Jackson Bowery, both of Western. The duo were sitting at 8-under-par 280 after 72 holes before Fitzsimmons went on to win the playoff on the first hole, which was the 18th.

“This is definitely the highlight, it’s been a long time coming,” said Fitzsimmons, who is in his 13th year on the Mustangs golf team. “You hate to have to decide a winner between you and a guy you’ve fought so hard with. It’s unfortunate, but somebody’s got to win. He played an absolutely incredible round to even get us in the playoff beforehand.”

In the women’s team division, UBC was paced by an even-par performance from Shania Remandaban to win their fourth consecutive women’s team title. Of their four-straight championships, this one was the closest, as their 51-over-par score on the tournament was one stroke better than Laval Rouge et Or.

“I don’t think the Canadian championship has been this tight,” said MacDonald. “These girls have had quite a year, and it’s really exciting to see them in these really difficult, tight situations pull things out.”

The women’s individual competition also came down to the final hole. As she was walking up to the 18th green, Sarah Dunning of the University of Guelph trailed Remandaban by one stroke. A birdie would have forced a playoff, but Dunning drained a 30-foot eagle to win the division. The eagle capped off a 4-under-par 69 final round for Dunning, the only round in the 60s in the women’s division during the tournament.

“I hit my seven-iron to the back of the green on 18,” said Dunning. “I had a long putt for eagle. Somehow it went in and all I remember is screaming and everyone clapping. It’s probably the best moment of my golfing career.”

As the Men’s and Women’s individual winners, Fitzsimmons and Dunning receive an exemption into their respective Canadian Amateur Championship

Click here for more information on the 2019 Canadian University/College Championship, including full leaderboards and results.