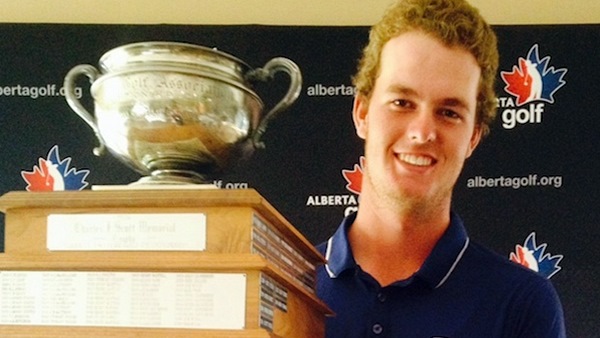 Junior golf appears to be alive and well in Alberta.

Saunders, with rounds of 70, 69, 65 and 67 produced a 9-shot victory. The nearest competitor was Jack Wood, who came in 8-shots back of the victor in what was one of the more lopsided victories at the championship in recent years.

Taking advantage of his length, Saunders eagled the par 5 7th hole for the 2nd consecutive day, making the turn in 3 under par on the day, before coming in with a 33 back nine to close out a round of 67.

“I had a really good start, everything was really solid,” said the newly crowned champion. “The guys I was playing with helped me feel comfortable out there,” Saunders said. “My putting was the best part of my game this week. The guys were getting sick of how many putts I was making on the back nine. I just had a good handle on the greens all week.”

Saunders will be off to the Canadian Men’s Amateur Championship at Elmhurst Golf & Country Club and Southwood Golf & Country Club in Winnipeg from August 4-7 as a representative of Alberta’s Willingdon Cup team.  Wood will join Saunders on that team alongside AJ Armstrong, who defeated Brett Hogan and Evan Holmes in a playoff for the final team position.

Jordan Irwin finished the championship as the low 25 years or older competitor earning the last position on the Alberta Mid-Amateur Interprovincial Team. Irwin will join teammates Harry Aime and Kevin Temple at the Canadian Mid-Amateur Championship at the Barrie country Club in Barrie Ontario September 16-19.