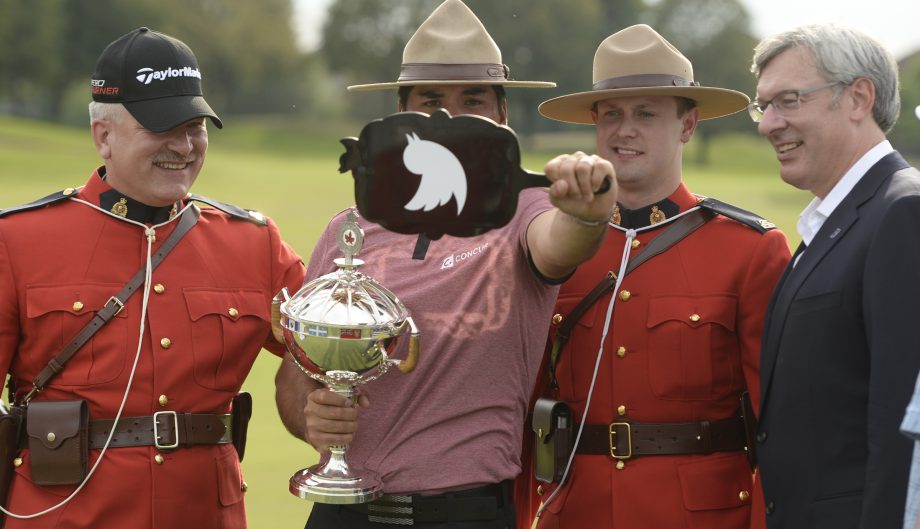 In the mere 24 months Christopher Doyle has worked at Twitter Canada’s modern office in Toronto, he’s seen a lot.

A Canadian election, a bat-flip (heard ‘round the world), numerous award ceremonies and playoff runs, and last year, a partnership with Golf Canada and RBC at the Canadian Open, just to name a few.

As Twitter Canada’s first-ever Head of Media Doyle works with some of Canada’s top brands and sporting events to “make the platform essential” and to make sure talent – whether it is individual athletes, networks, news outlets or sports teams, “maximize their use of the platform.”

Now more than ever – despite rumours of the networks’ demise – audience engagement through Twitter is important.

“I think it’s because it’s a very conversational platform and it can connect you instantly with others,” Doyle, who has also held communications gigs at both TSN and CBC, recently told CTV News.

At the RBC Canadian Open, Doyle brought the very popular Twitter mirror to Glen Abbey, where golfers like Bubba Watson and eventual champion Jason Day took pictures throughout the practice rounds, and after competition had completed from Thursday through Sunday.

“Fans were able to see some really entertaining shots,” says Doyle, “(Day) took an amazing selfie with fans in the background, and we got this really rich content that’s also personal. Fans can enjoy it even though they’re not on the course.”

That ability to feel like you’re really at a sporting event is key for the platform’s success, explains Doyle.

At the RBC Canadian Open, Doyle also installed Twitter TV – basically a television version of the handheld mirror – where fans could see all the tweets coming in from around the course, and also dress up in an official Canadian Open caddie outfit for a picture.

For Brian Decker, the media official for Mackenzie Tour – PGA Tour Canada, Twitter has been a huge priority.

“There’s a direct relationship with people who choose to follow you, so you speak to them and provide them with content a little differently than you would in other areas of marketing,” explains Decker. “When there’s a tournament going on or other messaging to share, seeing and reading that engagement in real time is an incredibly useful tool.”

And for the golfers that fans are used to seeing every week, Doyle says they already use Twitter very well.

“This young crop of amazing players is embracing Twitter. They’ve grown up with it and it’s naturally part of who they are,” he says. “It’s a great way for guys to connect to fans.”

One example of this is Graham DeLaet.

The Canadian has nearly 85,000 followers on Twitter, and his feed is filled with quips about his home and native land or life on the tour. He’s also not afraid to back down from a troll, especially when it comes about his beloved Calgary Flames.

“I love following (Graham). You’ll see him tweeting along to a hockey game just like you or I would,” explains Doyle. “You have this shared experience with him.”

The PGA Tour has embraced sharing video on the platform, which Doyle states will become even more important. For example, he says 90 percent of all videos consumed on Twitter are done so from a mobile device.

“It’s that ‘snackable’ content that’s live and in the moment,” says Doyle. “It allows you to follow action from anywhere, at anytime.”

For Decker, video sharing is a huge part of the Mackenzie Tour’s content strategy.

“Anything you can do to make it easier for people to follow along is really important, and being able to share (video) helps a lot,” he says. “With golf particularly, there’s so much interesting visual content to share.”

Twitter is an ever-evolving tool, and Doyle – who was recently named to Golf Canada’s communications committee – is excited to see where it goes, especially in terms of golf in Canada.

“It brings a real interactive element to a tournament. That’s a big part of it,” he says. “Golf Canada has embraced it, and we’re just happy to be involved and to help.”