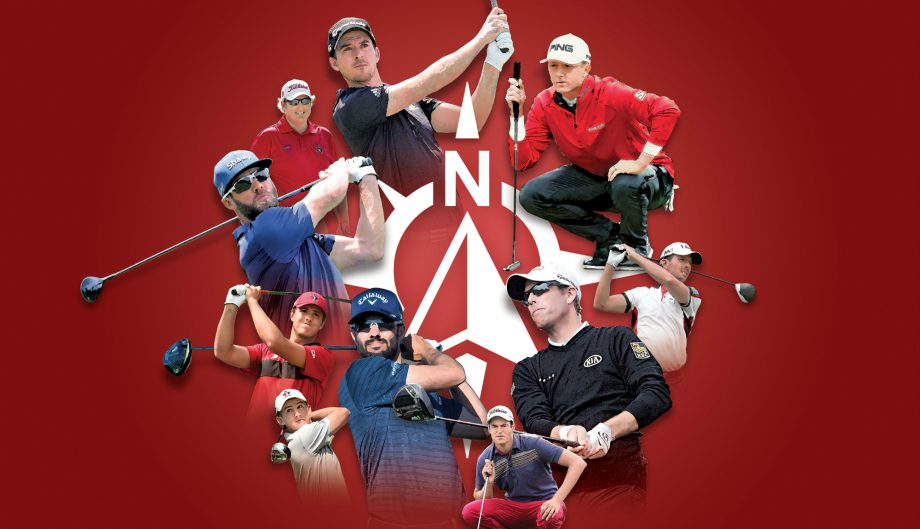 The 2017 RBC Canadian Open features the strongest collection of homegrown talent ever. So is this the year the drought ends?

Two years ago, shortly after standing in the 18th fairway watching Jason Day bury a 22-foot birdie putt on the final green up ahead of him to win the RBC Canadian Open, David Hearn sat down in the media centre at Glen Abbey in front of a throng of reporters. He knew what they were going to ask, but still found it difficult to articulate his emotions.

Entering the final round with a two-shot lead, Hearn and pairing mate Bubba Watson — who will rejoin the field for this year’s national men’s open championship after a year off — traded momentum throughout the day only for the superstar Day to string three birdies together on the final three holes and leap past them into the winner’s circle, capped by that emphatic putt on the last green. It was the start of a torrid stretch for the Aussie, who two weeks later won his first major at the PGA Championship at Whistling Straits.

Falling two shots short of Day’s mark and settling for solo third, Hearn, the Brantford, Ont., native, was appreciative of the thousands of fans that came out hoping to witness history. Had he succeeded in winning, Hearn would’ve become the first Canadian to win the event since Pat Fletcher in 1954. But he also acknowledged that the intensity of the moment and pile of pressure on his shoulders was difficult to manage.

“It’s going to take a special performance for (a Canadian) to win this tournament one day,” he relented.

Fortunately, an extremely deep crop of Canadians is ready to take on the task in the 2017 edition. Spearheading the group is Adam Hadwin, who’s enjoyed a stellar season thus far and ascended to Canada’s No. 1 player. The recently married 29-year-old won his maiden PGA Tour title at the Valspar Championship in March, just seven weeks after posting a career-low 59 at the CareerBuilder Challenge. A series of strong results and several final rounds in contention — which thrusted him as high as 44th in the world — have provided him with a boatload of confidence to lean on while trying to execute in crunch time. The B.C. boy would love to rekindle the magic he conjured up at the 2011 RBC Canadian Open at Shaughnessy G&CC (see sidebar).

Two Canadians behind him who also happen to have PGA Tour victories under their belt are Mackenzie Hughes and Nick Taylor. Each won in their respective rookie season, Hughes this year and Taylor in 2014, and along with Matt Hill, who secured a spot in the field by winning the Ontario Regional Qualifier in mid-May, they represent the fruits of Golf Canada’s labour when it comes to its national development program.

The infusion of homegrown talent in the event includes newly minted professional Jared du Toit (a recent Team Canada member and in on a sponsor’s exemption), who sprung to national fame with a ninth-place finish last year. Just as Hearn was in 2015, du Toit was in the final group on Sunday. Another Canadian on the rise is 2016 Canadian Men’s Amateur champ Hugo Bernard, who will tee it up in his second straight RBC Canadian Open.

Not to be forgotten are the more grizzled golfers that sport Canada’s colours. Hearn, Graham DeLaet, Mike Weir and Brad Fritsch have all battled down the stretch with big tournaments on the line, including in this event for Hearn and Weir (see sidebar). As for DeLaet and Fritsch, they shared top-10 honours at the 2014 event at Royal Montreal.

In years past, the national contingent featured only a few legitimate threats to win, such as Weir, Stephen Ames and Ian Leggatt in the 2000s and Dave Barr, Dan Halldorson and Richard Zokol in the 1980s and early ‘90s. The latest offering of promise and experience speaks to the depth of Canadian players currently competing at golf’s various levels.

“This will be an exciting year for Canadian golf fans for sure,” said Brent McLaughlin, RBC Canadian Open tournament director. “We’ve come close in recent years with David Hearn in 2015 and du Toit’s terrific run last year. This may be the year the drought finally comes to an end.”

The tournament has been dominated lately by some of golf’s long bombers bullying their way around Glen Abbey, such as Jhonattan Vegas in 2016, Watson and Day in 2015 and Dustin Johnson in 2016 and 2013. The latter, now the World’s No. 1 player, has already committed to tee it up this July and will be the favourite to clinch a championship that he’s been close to winning before.

On the other end of the spectrum, one of the shorter hitters in this year’s field, and one who’s no stranger to being an underdog, believes the Canadian contingent can overcome the odds too.

“It’s a matter of time,” said Jim Furyk, the 2006 (Hamilton G&CC) and ’07 (Angus Glen – North) Canadian Open champion after Hearn’s narrow miss. “There are so many good Canadian players. I feel bad Mike Weir never won this golf tournament. But Graham DeLaet, David, there are a bunch of fine young players, so I’m sure it’s going to happen.”

“I think every Canadian wants to see it so bad and we want to do it so bad that it does make it hard,” explained Hearn. “At the same time, I believe it will happen. I believe we have enough talent.”

This year, more than ever perhaps, the depth of Canada’s talent is certainly undeniable.

This article was originally published in the Summer Issue edition of Golf Canada Magazine. Click here to view the full magazine