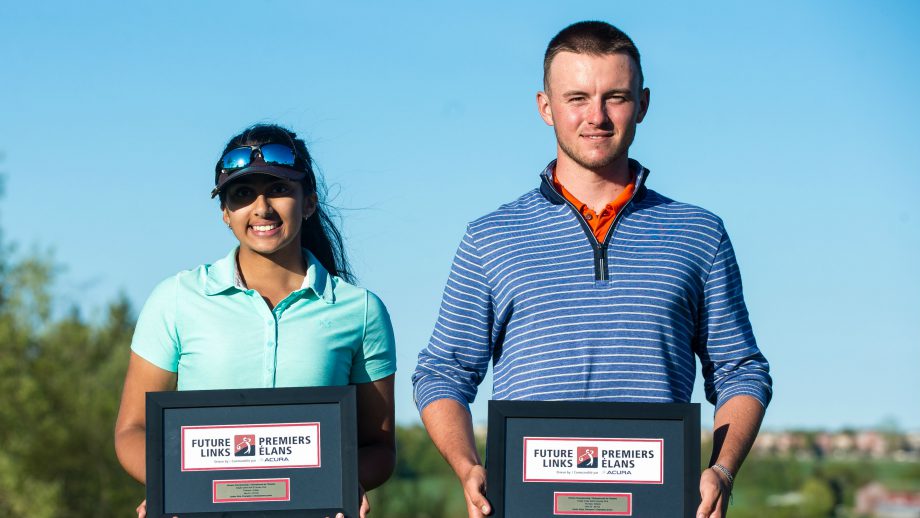 THORNTON, Ont. – Tristan Renaud of Sudbury, Ont. came from behind, while Angela Arora of Surrey, B.C. held on to her lead to win their respective divisions at the Future Links, driven by Acura Ontario Championship at Tangle Creek Golf & Country Club on Sunday.

Renaud started the final day five shots behind the lead, but that deficit didn’t last long. On his first hole, he made an eagle three on the 486-yard par five. Renaud put his game into cruise control, making par on his next 14 holes. Renaud would go on to finish the three-day event at 1 over.

“If you look at it on the scorecard it was pretty blemish-free, but there were a lot of good par saves and a lot of short-to mid-range putts I made,” said Renaud. “It wasn’t a scoring day per-se – the wind was strong, so I’m pretty happy with it.”

A bogey on the par-five 18th made things tight at the top of the leaderboard, as Brandon White of Bourget, Ont. finished one-shot back at 2 over.

Yuqi Liu of Thornhill, Ont., Ben MacLean of Niagara Falls, Ont. and Logan Boucher of Beaconsfield, Que. finished in a three-way tie for third at 3 over.

In junior girl’s action, Arora entered the day in the lead and shot a final-round 81 to withstand a strong push from Oakville, Ont., native Katie Cranston.

Cranston briefly held the lead, but a double bogey on the penultimate hole opened the door for Arora, who made par on each of her last four holes to clinch the title. Arora finished at 12 over par for the tournament to edge Cranston by a stroke.

“Today I had a really strong start,” said Arora. “I ended up getting into some trouble on the sixth hole, but I was also to cope and get over it. I knew I had to finish off strong because everyone was playing well.”

Finishing 3-shots back was Sarah Gallagher at 15 over par.

The duo of Madelin Boyd of Oshawa, Ont. and Victoria Zheng of Markham, Ont finished T4 at 21-over.

Full scoring and results can be found here.