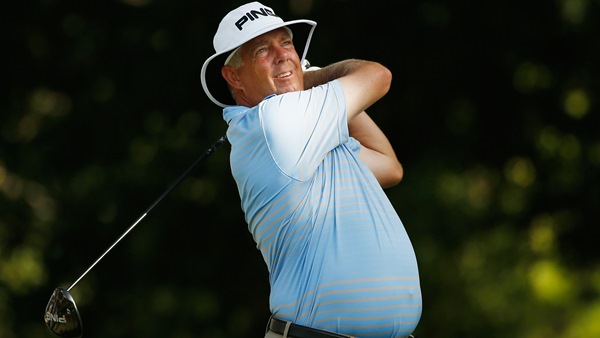 CARY, N.C. – Kirk Triplett holed out from 143 yards for eagle on the par-4 18th hole Saturday to take a two-stroke lead in the Champions Tour’s SAS Championship.

Triplett, the ACE Group Classic winner in February for his third victory on the 50-and-over tour, finished with a bogey-free 9-under 63 to reach 11-under 133 at rain-softened Prestonwood.

Paul Goydos and Tom Lehman were tied for second. Goydos, the Hawaii Championship winner last month for his first senior title, had a 67. Lehman shot 68.

Goydos flew his tee shot in the water and bogeyed the first hole of the day. He called his opening shot a “bit of a wake-up call.”

“I just kind of hung in there and made a couple of nice birdies on 6 and 7,” Goydos said. “But I’ve got a feeling tomorrow you’re going to have to go low and make a lot of birdies.”

First-round leader Guy Boros was tied for fourth at 11 under, following a 66 with a 70. Boros is making his second tour start after turning 50 last month. Fred Funk also was 11 under after a 64. Boros faltered with bogeys on 14 and 15, while Funk birdied five of the last eight holes.

Funk said he was having issues with his calf Friday, but he felt better for the second round.

“I was struggling to even hit the golf ball (Friday),” Funk said. “Today, I was feeling a lot better and was able to swing at it, so I picked up about 30 yards on my drive.”

Bernhard Langer, the 2012 winner, was tied for ninth at 6 under after a 65. Langer has a tour-high five victories – two of them majors – and leads the money list and Charles Schwab Cup points race.

Montgomerie, second in the Schwab Cup standings, was another stroke back after a 66. He has two major victories this year.

Defending champion Russ Cochran was 4 under after a 69.

On the Canadian watch, Stephen Ames and Rod Spittle have a share of 49th place at even-par 144. Jim Rutledge is tied for 65th at 2-over 146.