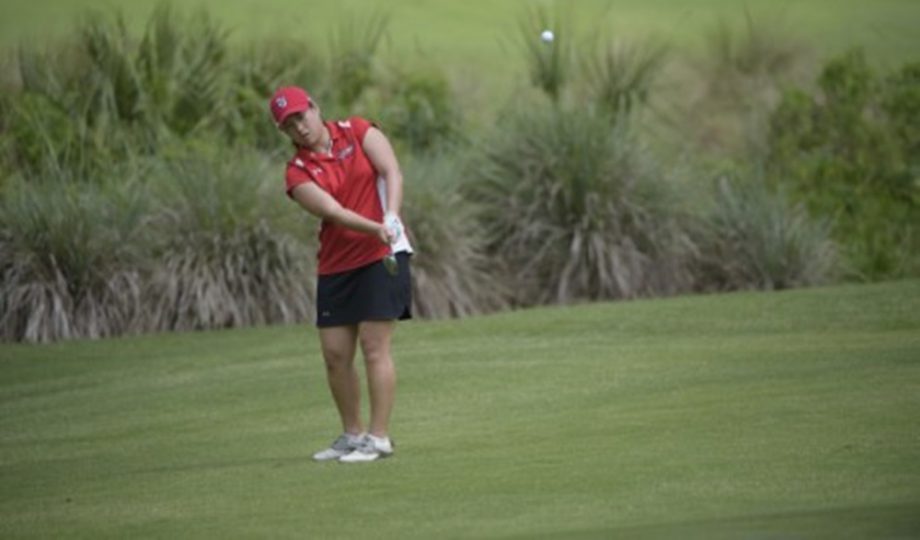 RANCHO MIRAGE, Calif. – Stanford All-American and match play wizard Mariah Stackhouse (Riverdale, Ga.) carded a 4-under, 68 on the Arnold Palmer Course Saturday to move into a five-way tie for the lead at 8-under, 208 after three days of Stage I of LPGA Qualifying Tournament. Madchen Ly (Fresno, Calif.), Savannah Viluabi (Downey, Calif.), Sarah Schmelzel (Phoenix, Ariz.) and Daniela Darquea (Quito, Ecuador) are also 8-under with one round left.

The 54-hole cut was made at 6-over, 222 and 135 players will tee it up on Sunday on the Dinah Shore Course, which is host to the ANA Inspiration on the LPGA. The low 90 and ties after final-round play on Sunday will advance to Stage II of LPGA Qualifying Tournament, the week of October 17-23 in Venice, Florida.

Stackhouse, 22, made six birdies on the day.

“I hit my irons the best I’ve hit them this week,” said Stackhouse. “I was able to capitalize on good iron shots. Today was definitely the best day if you looked at the quality of golf. It was textbook golf, nice and simple.”

Stackhouse, who has a laser focus this week, is not resting on her success into Sunday.

““My goal tomorrow is to continue to work on my irons,” said Stackhouse. “I needed to get rid of the pull. I want to give the Dinah Shore course a better run. I need to keep getting better, better in competition. This week is just another week and another opportunity to learn what I need to work on.”

Stackhouse will head to the Sioux Falls GreatLIFE Challenge, a Symetra Tour event, on Monday afternoon.

Vilaubi, 22, has won four times as a professional this year including the Texas Women’s Open.

“I couldn’t be happier to have strung together three solid days of golf during a potentially career-determining tournament,” said Vilaubi, who graduated from UC-Riverside in 2015. “I’m thrilled to be going into tomorrow with such good momentum. The game plan is to have as much fun as possible in the final-round.”

Madchen Ly (Fresno, Calif.) posted a bogey-free 3-under, 69 on the Gary Player Course on Saturday at Stage I of LPGA Qualifying Tournament to move into a 5-way tie for the 54-hole lead with one round to play.

“This is one of the best scoring weeks I’ve had,” said Ly, who is a rookie on the Symetra Tour. “This is my first time shooting three straight rounds under-par. The first few months on Tour were tough, knowing where to stay and all that, but I kept telling myself that it is all about the process and journey.”

Ly, 23, was a three-time All-Mountain West Conference selection at Fresno State. She has a ton of familiarity at Mission Hills because the last three years of her career, the conference championships were played on the Dinah Shore Course, where she finished sixth as a senior in 2015.

“When I come to the desert, I feel very familiar,” said Ly. “I have a comfort and am staying right on the golf course with my parents.”

Ly has made just one cut in nine starts on the Symetra Tour. She earned Tour status by advancing all the way to Final Stage in 2015.

Ly has made 15 birdies through three rounds.

Five Canadians made the cut into the final day of competition, lead by Toronto’s Anna Kim who stayed even to claim a share of seventh at 6-under. Taylor Kim is T39 at even-par, one-stroke ahead of fellow Surrey, B.C., resident Aram Choi and Anna Young of Saskatoon. Maya Parsons of Whitby, Ont., completes the Canadian contingent at 6-over through 54-holes.