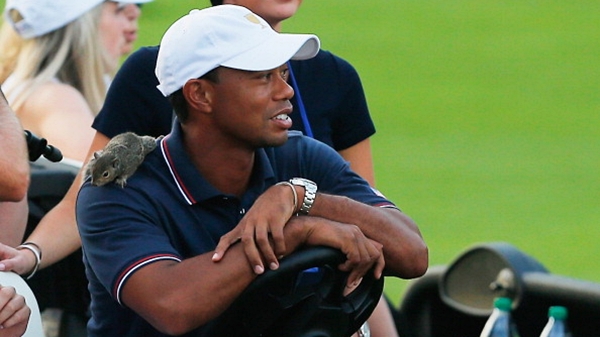 Check out the 10 most memorable animal encounters on the PGA Tour, featuring Sammy the Squirrel, an iguana in Puerto Rico and the seagull at THE PLAYERS Championship.

Ed Burke has been on the PNGA Board of Directors for six years, serving as vice president for three years for Zone 5 (Idaho). Burke brings a great deal of experience to his new role as PNGA president, having served as president of three other clubs; Meadow Springs Country Club in Richland, Wash. in the mid-1970s; Hayden Lake (Idaho) Country Club in 1997; and the Spokane Club in downtown Spokane. A graduate of the University of Kentucky, Burke served in the Navy before starting a career in the FBI, and has been based in the Northwest since 1972. Retiring from the FBI in 1997, he then co-owned a sod farm near Pasco, Wash. which supplied turf to golf courses. He still lives outside of Spokane.

“My hope during my tenure is to have the PNGA continue to assist all the affiliate organizations within the golf industry in communicating a shared goal,” said Burke. “We all have the same desire to promote and sustain the health of the game, because of the tremendously positive aspects it brings to communities and to society at large.”

Ed Burke is replacing Robert Black of Meadow Springs Country Club in Richland, Wash. Black served a two year term as PNGA president and was instrumental in helping the PNGA become a more financially stable organization and helped lead the PNGA by assisting with the implementation of a strategic plan to carry out for years to come. Black will continue to serve on the PNGA Board of Directors as the Immediate Past President.

Also elected at the meeting was Scott Masingill of Scotch Pines GC in Idaho, who will serve as the new Vice President of Zone 5. Other Vice Presidents include Larry Giustina of Eugene CC, for Zone 1; Kent Brown of Dominion Meadows in Colville, Wash., for Zone 2; Ben Stodghill of Bellevue Municipal in Bellevue, Wash., for Zone 3; and Peter Fibiger of Olympic View GC in Victoria, B. C., for Zone 4.

Mary O’Donnell of Overlake G&CC in Bellevue, Wash. was elected as Secretary, and Robin Anderson, of Ellensburg Golf Course, is the Treasurer. Dr. Jack Lamey (former Immediate Past President) will now serve as an additional member of the PNGA Board of Directors.

The PNGA was founded on February 4, 1899.  It is a 501c3 charitable, international, amateur golf association dedicated to preserving the true spirit of golf by supporting its allied associations, conducting quality championships, and promoting activities beneficial to golfers in the Pacific Northwest. The PNGA employs a full-time staff of 14, headed by a CEO/Executive Director, with offices located in Federal Way, Wash. Under the direction of the Board of Directors and in conjunction with a number of standing committees, the staff administers the day-to-day affairs of the Association. PNGA territory is broken down into five zones, which are: Zone 1 – Oregon; Zone 2 – Eastern Washington; Zone 3 – Western Washington and Alaska; Zone 4 – British Columbia and Alberta; and Zone 5 – Idaho and Montana. There are approximately 220,000 individuals at over 720 PNGA member golf clubs.

The original purpose of the PNGA was to conduct a regional amateur championship for men and women. For 115 years, the Association has been a pioneer in developing competitions and services and its mission has grown and evolved. Today, the PNGA remains committed to being a truly “regional” organization providing benefits and services to its members and member clubs throughout the Northwest.

Visit www.thepnga.org for more information on the association.