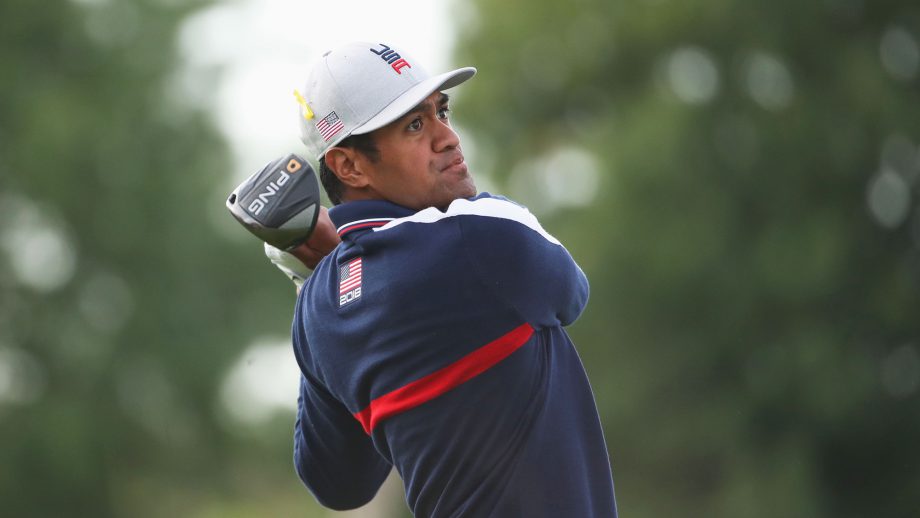 Down to the edge of the water at the first hole.

Up and over a fence at the seventh.

Right into the water at the 15th.

Then, with three holes to go Friday and the Americans desperately needing a break in the opening match of the Ryder Cup, Finau went to his bank shot.

That would seem a better option in basketball, a sport he once played so well he was offered a college scholarship.

Well, Finau made it work at the golf course.

“Sometimes the ball rolls your way,” he said with a shrug, “and sometimes it doesn’t.”

At the par-3 16th, where the water spreads out in front of the green, promising to swallow up any errant shot, Finau launched one toward the flag 177 yards away.

As soon as he struck the ball, he knew it was close.

So did his caddie. So did his fourballs teammate, Brooks Koepka. So did everyone who watched it get caught by the stiffening breeze.

“I knew it needed to get up,” Finau said. “I was kind of wishing for that while it was in the air. I got lucky.”

His shot caught one of the wooden planks that divide the water from dry land, deflected onto the green and stopped about 3 feet from the cup.

A few minutes later, with the European fans actually booing his good fortune, Finau tapped in the birdie to even the match. At the 18th hole, Justin Rose dumped one in the water, Jon Rahm missed a putt and the Americans somehow escaped with a 1-up victory.

It was the first time they had led all day.

Afterward, all the talk was about No. 16.

“That was a huge turning point in our match,” Finau said. “I was able to brush that one in and get our match all-square. Honestly, the momentum was on our side because they were 2-up and looking to close us out, and we were able to stretch that match out, and then we played incredible golf on 18 to win the match.”

Not bad for a Ryder Cup rookie.

Finau, who is Tongan and Samoan descent and grew up in Utah to working-class parents who scraped together every spare dollar so he’d have a chance to play, earned his spot on the U.S. team with a strong season that included Top 10s at three of majors and a spot in the finals of the FedEx Cup playoff.

Still, it was a bit of a surprise when he was picked to play the opening fourballs match with Koepka – and then got the honour of hitting the very first shot of the weekend.

Clearly pumped as he stood before a massive grandstand holding nearly 7,000 fans, Finau nearly knocked his ball into the water – some 300 yards away – with a 3-iron that was merely intended as a lay-up.

“The first tee shot was not like anything I’ve been involved in before,” Finau said. “It was like a feeling of a football game back in the States, an NFL football game, and I’m in the middle of the field and I have to hit a tee shot. I have to make a golf swing with all that adrenaline. It was incredible.”

So began an adventurous day that included a tee shot slicing out of bounds, a shot that did get wet, not to mention a chip-in for eagle at No. 6.

Koepka had his struggles, too, notably when a woeful tee shot caught a fan in the eye, leaving her bleeding and in need of medical care. It wasn’t immediately known how seriously she was injured.

Through it all, Finau and Koepka never got flustered.

“In these type of matches, you can’t show your weakness. You can’t show that you have any kind of emotional weakness or you’ll get eaten alive,” Finau said. “It’s frustrating not to hit the shot you want to hit, but you’ve got to control your emotions. We were able to do that and that’s why we were able to pull this match off.”