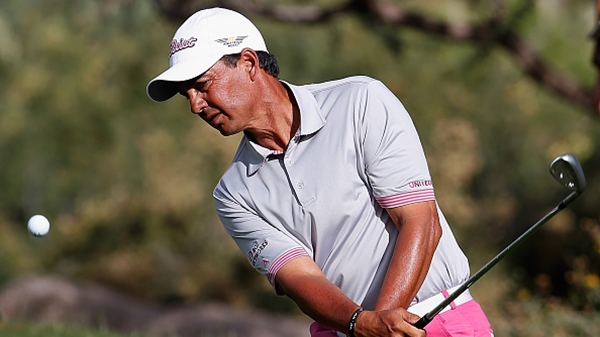 SCOTTSDALE, Ariz. – Tom Pernice Jr. shot a 5-under 65 on Thursday to take a one-stroke lead over Bernhard Langer and three others in the Champions Tour’s Charles Schwab Cup Championship.

“I drove the ball straight today, kept it in play,” Pernice said “I think that’s important. If you do that here, you’re going to have some good opportunities.”

The 55-year-old Pernice won the Principal Charity Classic in Iowa in June for his third career victory on the 50-and-older tour. He rebounded from a bogey on the par-3 17th with a birdie on the par-5 18th on Desert Mountain’s Cochise Course.

“No. 17, pulled it left of the green, pretty bad spot to be in there,” Pernice said. “I had a tough chip, but I hit a great chip and it went by about 7 feet and just pushed it a little bit and made bogey. And then

Langer won the Charles Schwab Cup points title last week in San Antonio, taking a lot of the drama out of the season-ending event. The 57-year-old German star has a tour-high five victories – two of them majors – and also has wrapped up the season money title with $2,916,189.

“I got off to a really good start, made some putts on the front nine and played pretty solid,” Langer said. “Four under on the front, that’s a really good score. Then back side, the putter got cold, especially the last five holes or so. I had five really good chances, didn’t make one of them, so that was disappointing the way I hit really good shots and gave myself opportunities and just couldn’t convert.”

Jay Haas, Kenny Perry and Joe Durant matched Langer at 66. Haas won two weeks ago in North Carolina to become the 18th player to win a Champions Tour event at 60 or older.

“I think it’s a pretty hard day out there, certainly not like it was a couple years ago,” Haas said. “I believe two years ago the course was playing faster, so shorter, but the greens I thought were softer a couple years ago. We had a hard time stopping the ball around the hole today, for me anyway.”

The top 30 on the money list qualified for the tournament.

Fred Couples, the winner last year at TPC Harding Park in San Francisco, had a 71. Tom Lehman also shot 71. He won the 2012 tournament at Desert Mountain.