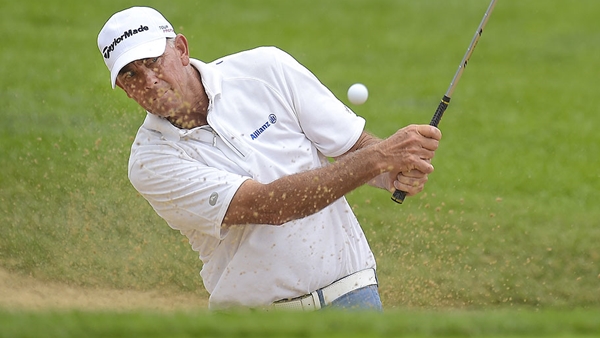 GLENVIEW, Ill. – After struggling with his putting much of the round, Tom Lehman made a 12-foot birdie putt on the final hole Sunday to win the Champions Tour’s Encompass Championship.

“It wasn’t my very best performance today, but it was good enough,” Lehman said.

Michael Allen and Kirk Triplett tied for second, a stroke back. Allen shot 67, and Triplett had a 68.

“The check is sweet, but the trophy is sweeter,” Lehman said.

His last win was the Schwab Cup Championship at the end of the 2012 season.

Lehman, who was bogey-free and made 13 birdies in the first two rounds, parred the first 11 holes before birdieing No. 12.

“I had a rough start and wasn’t putting like I did the first two days,” Lehman said. “It put me in a bit of a bind. After 14, I told my caddie, `Let’s have the best four holes of the week.'”

Triplett birdied the first, sixth, 13th and 16th holes in his bogey-free round. His approach on the final hole stopped in the back fringe. He missed a 20-foot birdie attempt.

“I said early in the week that 15 under would win and 15 under wins,” Triplett said. “I had some chances, missed a couple and made a couple. I had a pretty tough putt on 18 coming down that hill to keep it on line. So, next week.”

Allen birdied three of the last four holes, with his approach on 18 hitting the flagstick and stopping 4 inches from the cup.

Doug Garwood was fourth at 13 under after a 66. He played the first 10 holes in 4 under and briefly grabbed a share of the lead at 13 under with an eagle on the 16th hole, but three-putted for bogey on the 17th to fall back.

Russ Cochran took advantage of a swing adjustment to shooting the best round of the tournament, an 8-under 64 that left him in a tie for sixth at 10 under.

“I got up on my toes more,” Cochran said. “Seems like a little thing, but it seemed like it did the trick.”

Colin Montgomerie was 10 under after a 70.