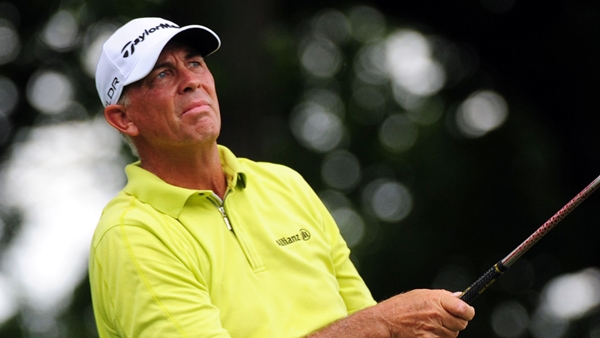 GLENVIEW, Ill. – Tom Lehman birdied four straight holes and finished with a bogey-free 7-under 65 to take the first-round lead Friday in the Champions Tour’s Encompass Championship.

Finishing on the front nine, Lehman birdied Nos. 4-7 and closed with two pars at North Shore Country Club. The 55-year-old Minnesotan nearly holed out for an eagle on the par-5 sixth, leaving a 6-inch putt, and ran in a 15-footer on the par-3 seventh.

He has struggled with his putting since winning the last of his seven senior titles in 2012.

“I’ve been living in this zone of second-guessing my reads, second-guessing my stroke because I misread so many putts,” said Lehman, whose best finish this season is a tie for third at the Tradition. “Then I become less committed to the putt and start putting bad strokes on them. It’s kind of a cycle. It’s been a very frustrating last couple of years in that way.”

Of his seven birdie putts, the longest were three from about 15 feet.

Chapman made four straight birdies early in his round, then birdied the 11th and 14th holes en route to his best score of the season. He switched caddies this week, using veteran Angel Monguzzi.

“I felt totally in control,” Chapman said. “There have been times this year I’ve been anxious. Today, I was very relaxed going around with Angel. He seemed to be saying the right things at the right time.”

Garwood, a playoff loser this month in the Principal Charity Classic in Iowa, chipped in from the rough on the 13th for one of his eight birdies.

“It gave me a boost as far as being comfortable with all the players,” Garwood said about the second-place finish in Iowa.

Canada’s Rod Spittle opened with a 68 and was tied for 11th heading into the weekend. The other Canadian in the field, Jim Rutledge, carded a 75.

Colin Montgomerie, the Senior PGA Championship winner in his last tour start, had a 69.

Charles Schwab Cup points leader Bernhard Langer shot 71. He had a double-bogey 7 on No. 6.