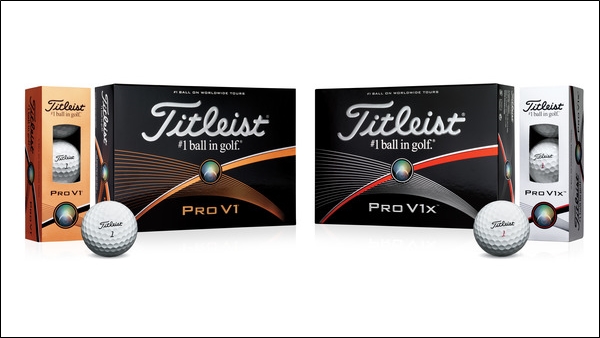 It was in October 2000 when the original Pro V1 prototype first appeared on the PGA Tour at the Invensys Classic in Las Vegas. Forty-seven players put the ball in play that week, marking one of the largest pluralistic shifts of equipment at one event in golf history. In March 2001, just months after launching to golf shops, Titleist Pro V1 became the best-selling golf ball in the marketplace.

“The launch of Pro V1 was especially significant in that for the very first time the best performing golf ball for tour players was also the best performing golf ball for all golfers,” said Mary Lou Bohn, Vice President of Titleist Golf Ball Marketing and Communications. “You no longer had to choose between distance over short-game control, or durability over soft feel. There were no trade-offs. Pro V1 delivered total performance.”

Pro V1 and Pro V1x (which launched in 2003) have been the most played golf balls at every level of competitive golf and the best-selling models around the world ever since.

The total performance of Pro V1 and Pro V1x tee-through-green – providing the best combination of distance, flight, short-game scoring control and feel – makes them the best fit for any golfer.

“Golfers often ask us what sets Pro V1 and Pro V1x apart from other golf balls. You can’t just point to one or two things,” said Bill Morgan, Senior Vice President, Titleist Golf Ball R&D. “The difference is everything. We have more people with more experience designing and making golf balls, the largest intellectual property portfolio and the most sophisticated precision manufacturing processes. The 2015 Pro V1 and Pro V1x are the culmination of all that knowledge and all of that technology. The original Pro V1 was revolutionary, no question, but we’ve learned a lot in the last 15 years and these new Pro V1 models are the best we’ve ever made.”

The Titleist Golf Ball R&D team, driven by a commitment to continuous improvement and innovation, is made up of chemists, physicists, mathematicians, computer scientists, engineers and technicians, as well as PGA Professionals and turf management specialists. Due to their work, Titleist owns the industry’s largest portfolio of golf ball intellectual property with more than 1,000 patents. Since 2010, Titleist has been awarded nearly 50 percent of all golf ball patents issued in the United States. There are more than 100 patents that cover the technologies and manufacturing processes for 2015 Pro V1 and Pro V1x combined.

Before being introduced to the market, new Pro V1 and Pro V1x golf balls are tested and validated by golfers at every level of the game, from the world’s best tour players to amateurs of all skill levels and swing speeds.

So, you might ask yourself, should you play the Pro V1 and Pro V1x?

Both Pro V1 and Pro V1x deliver extraordinary distance, the best scoring performance for all golfers, and long lasting durability, yet differ in feel, long game spin and flight.