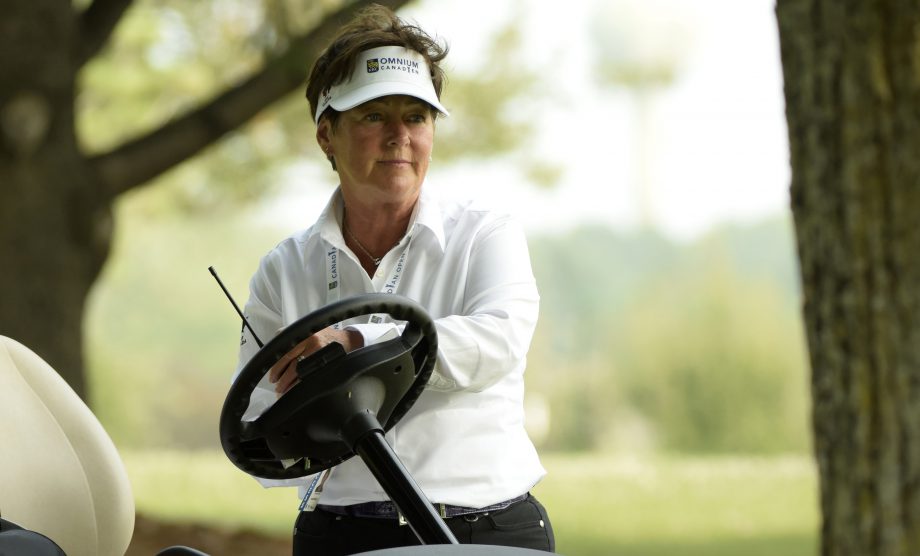 Ask Diane Barabé and she’ll tell you she’s not the biggest people person. She’s reserved, more than happy to do her thing and speak when spoken to. But on the golf course, the longtime volunteer rules official busts out of her shell. A proud member of the “Rulies” fraternity, Barabé is sociable and confident when in her element.

It stems back to when she first got involved in the game in the mid-1990s. The Granby, Que., native was voted onto the Board of Directors at her local Club de golf Miner — the first woman ever to be elected — and was thrust into a role demanding constant conversation right off the bat.

“I remember they put me in charge of disciplinary action,” recalls Barabé. “I said, ‘Great, I’ll have nothing to do’ but it was quite the opposite. I think I learned how to approach people and how to interact with different people. I like to be involved. If I’m going to be involved in something I don’t just want to sit back. You’re a volunteer because you’re a bit selfish, you like it.”

Barabé talks joyfully when describing how rewarding her volunteer experiences have been. Through stops at the Canadian Ladies Golf Association to Golf Québec to Golf Canada, she’s spent more than 20 years giving her time to golf and making countless friends along the way. Her commitment and service were honoured in 2014 when she was awarded Golf Canada’s Volunteer of the Year.

“There’s so many deserving people in the field, there’s so many rules officials that deserve the same honour and are so knowledgeable and give so much of their time,” she says. “I was just humbled by the honour and to be chosen from across Canada was unspeakable. I can’t explain how I felt.”

Annually committing two to three months of her summer to work tournaments, the Level 4-certified official has presided over every class of competition, including five PGA and LPGA Tour events. But for the retired college administrator, it’s the more active role at junior events that she enjoys most.

“You’re helping them out with the rules and you’re making them better golfers,” explains Barabé, who guesses she’s read the Rules of Golf at least 60 times. “You’re educating them and that’s the part that I like. It’s the helping part that I love the most.”

Barabé’s affinity for students, both in the fairways and the hallways, has been an impressive balancing act. For several years she was away for the first two weeks of the school year in order to volunteer for Golf Québec. Her absence was approved — actually encouraged — for its selflessness and dedication.

Adam Helmer, Golf Canada’s director of rules, competition and amateur status, calls her a “team player” and has witnessed her passion firsthand for the past nine years.

“She’s so involved and always all-in,” describes Helmer. “I don’t think she’s ever missed a rules seminar or working eight to 10 events a year since I’ve known her. She’s always studying, always in the book. She’s got a great rapport with not only Canadian officials but internationally from the events she’s worked. They always have great, positive things to say about her.”

The accolades don’t end there for Barabé. Already a member of Golf Canada’s Rules and Amateur Status Committee, she will become the first female chairperson of that committee in 2017. Attendng the R&A Tournament Administration and Referee School and receiving a mark of distinction on the exam three years ago made her more than qualified for the role and resides as a career highlight.

“I get goosebumps just talking about it still,” she explains of the trip to Scotland. “All the stress of preparing to go there and do the referee school and stepping foot on the Old Course and getting to play it. To me, that was a cherry on the sundae.”

The visit to St. Andrews came as a pleasant surprise though. Golf Canada originally selected her for the once-in-a-lifetime opportunity in 2012 but Barabé had to decline since she had previously promised to babysit her grandson that same week. Luckily, she admits, another offer came around the following year.

It’s just one of many gifts the avid volunteer, despite all the time and energy she’s given to the game, is grateful for receiving. And the people she’s met throughout the years, and the relationships she’s developed, have been payment enough.

“This has made me a bit more outgoing and helped me communicate with other people. I’ve learned so much through the years and met so many wonderful people and made so many friends. So when I’m out there and doing this I’m just having a good time.”