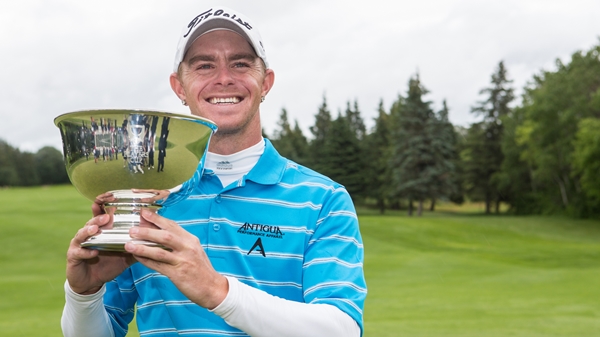 Madigan’s even par 71 at Pine Ridge Golf Club gave him the title by a shot over Bright’s Grove, Ont.’s Matt Hill and Edmonds, Washington’s Ricky McDonald.

With the win, the 25-year old PGA Tour Canada rookie moved up to second on the Order of Merit with $53,460 and secured a spot in the top three through next week’s Staal Foundation Open presented by Tbaytel, earning a spot in the 2014 RBC Canadian Open.

“To be a winner on PGA Tour Canada, I mean, I dreamt about it. Did I think it would happen in my rookie year? Probably not. I knew it was possible, but to be out here is just a privilege,” said Madigan.

The New Mexico State grad began the day with a two stroke advantage over Fargo, North Dakota’s Josh Persons, who beat Madigan by a shot last month to win the Bayview Place Island Savings Open presented by Times Colonist in Victoria. It was Hill and McDonald who made a charge, however, with the trio tied late in the back nine at 8-under par.

Madigan came to the par-5 15th facing a tough up-and-down to stay tied for the lead. Instead, he chipped it in, with the ball rolling around the cup before dropping for the last birdie he would need. He would go on to two-putt from 75 feet at the 72nd hole, draining a nervy three-footer for the win.

“Making that three footer, that’s why I practice – to be in that moment, to have that chance to get a win,” said Madigan, who was determined to rectify a missed chance to win earlier this season. “I let it slip away from me in Victoria and I definitely wasn’t going to allow it to happen again.”

The win comes at an exciting time for Madigan, who said he thought of his fiancée, Deb Albo, when facing the biggest putt of his career on the 72nd hole. The pair are scheduled to be married next May.

“That girl has stuck by me through thick and thin, through probably the worst lows of my career to the highest high, which is without a doubt right now,” said Madigan. “She’s an absolutely perfect woman in my eyes.”

Hill earned his best finish on PGA Tour Canada since winning the Order of Merit in 2012, while McDonald, who finished second at the Syncrude Boreal Open presented by AECON, moved to fifth on the Order of Merit. Grand Rapids, Michigan’s Clark Klaasen posted a career-best fourth place finish at 7-under par.

With a final round 67 to finish in a tie for second, Hill earns Freedom 55 Financial Canadian Player of the Week honours, taking home a $1,500 prize.

Tim Madigan also secured a spot in the RBC Canadian Open, mathematically assured of being in the top three through next week.